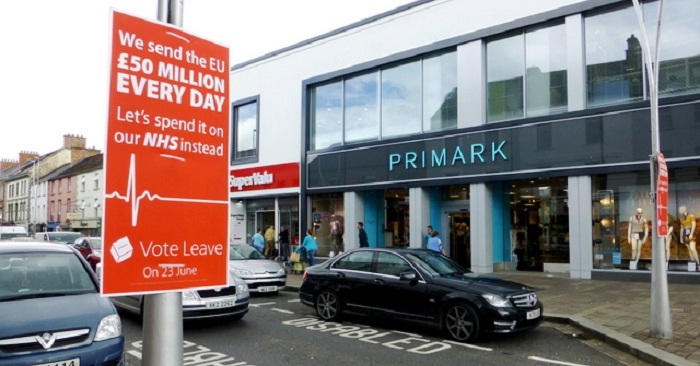 A “Vote Leave” poster in Omagh, Northern Ireland, saying “We send the EU £50 million every day. Let’s spend it on our NHS instead.” Photo by Kenneth Allen.

It has been reported that plans to mint a commemorative coin to mark the departure of the United Kingdom from the European Union have gained traction once again as Britain’s Finance Minister is understood to have scheduled production for the coins.

Mainstream media in the UK has published information that British chancellor Sajid Javid has asked officials to look into whether it would be possible to produce the circulation-quality 50-pence coins in volume that could be ready for the UK’s scheduled EU departure date on the 31st October. The date of both the production and issue of the coins is relevant since the coins’ design includes the date of the actual “Brexit” event.

The plans are being re-visited, as the treasury unveiled the coin’s design late last year and had expected the coins to be available to collectors by the original date of the UK leaving the EU, which was scheduled for the 29th March 2019. According to the initial plans for the coin, former Finance Minister Philip Hammond authorised Brilliant Uncirculated and precious metal Proof quality coins to be produced for the collector’s market, but none produced for general circulation. The politically charged event has divided the government and public opinion since the referendum was held in June 2016. Chancellor Hammond infuriated “Brexiteers” (or those supporting the UK departing the EU) with his warning about a likely economic impact of leaving and his opposition to a no-deal scenario. In contrast to his predecessor, Sajid Javid proposes the coins be produced in mass quantity for general use, and is being presented as a statement of intent that the treasury is fully behind ”Brexit.” The coins do face some delay in terms of royal ascent. The commemorative coins, which include a special inscription Peace, prosperity and friendship with all nations and the departure date of 31 October 2019, will need palace approval from the Queen’s privy council of ministers, who are not due to meet again until October after the summer holiday. Unless this is secured, a sufficient amount of the circulation quality base metal coins cannot be minted in time for the actual departure date.

This information comes at the same time that it has been disclosed the Royal Mint did not produce any one-penny or two-pence circulation coins for 2018. The reason given for this omission was due to the explanation that there was more than a sufficient quantity of both denominations currently in circulation.

Currently, the treasury reports there are around 10.5 billion one-penny coins and 6.3 billion two-pence coins in use.

In March 2018, former Chancellor Philip Hammond called for views on the current number of banknote and coin denominations in circulation. Research by the treasury, which both advises and commissions coins to be produced by the Royal Mint, determined that six in 10 pennies are only used once in any transaction, then are removed entirely from circulation. Surprisingly, the treasury reported that one in 12 one-penny coins are thrown away and discarded. The research was ordered because the treasury was also concerned with the cost of producing the coins versus their seigniorage, or face value. A final decision was made in May which confirmed the two smallest denominations would both remain in production and general circulation.

The treasury also confirmed that the largest coin denomination, bi-metallic £2 pieces were also not produced for general circulation in 2018, owing to the same conclusion that with a face value of £494 million pounds, there was already a sufficient amount in circulation. However, the Royal Mint continued with a number of commemorative £2 coins struck in Brilliant Uncirculated base metal and Proof quality precious metal options.

For additional information about the coins currently in use within the United Kingdom, please visit the website of the Royal Mint.