The Royal Mint, along with the American-based Numismatic Guaranty Corporation, have announced (15th September) the formation of a partnership to offer coin collectors and investors encapsulated, authenticated, and graded products from the Royal Mint’s portion of new releases. In a press release distributed to the media, the Royal Mint, which is the official mint of the United Kingdom, and NGC, the world’s largest third-party coin grading service, announced their partnership as well as the first product which will be offered. As part of the partnership, the Royal Mint will work directly with NGC to expertly grade and encapsulate portions of its unique product offerings, giving its customers and collectors new options not previously available.

Third-party grading and encapsulation, along with certification, is often referred to as “slabbing,” which references the rectangular security-sealed capsules used in the process. The services originated in the United States in the late 1980s as a way to professionally and independently certify and grade coins by an expert as well as guarantee and assess a coin’s authenticity and grade. The service is believed by many to have increased the ability to trade valuable and rare coins with more confidence and fewer disagreements about a coin’s grade and authenticity. NGC was established in 1987 and has since grown to become the world’s largest third-party grading service with more than 48 million coins certified. Many collectors and professionals all over the world have embraced the confidence and value that the NGC certification brand offers. NGC confirms that every coin that their offices certify is guaranteed to be authentic and not over-graded. 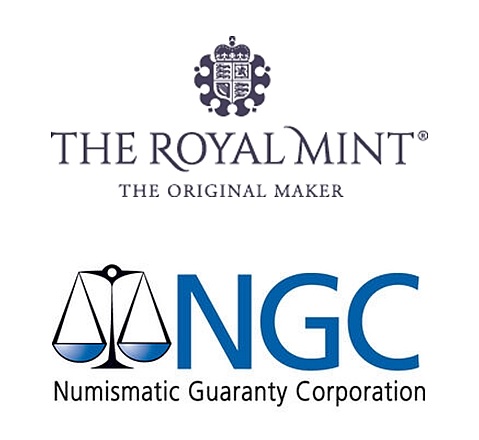 The Royal Mint’s Collector Services division, which was launched in 2017, provides a full range of products and bespoke services to collectors of historic and rare coins in both the UK and internationally. There is also an authentication and valuation service that the Royal Mint offers, as well as a coin finder service available to new and established coin collectors.

NGC is the world’s largest and most trusted third-party grading service for coins, tokens, and medals. Every coin that NGC certifies is backed by the comprehensive NGC guarantee of authenticity and grade, which gives buyers greater confidence. Their certification can often result in the best prices realised and greater liquidity for NGC-certified coins. NGC has offices in the United States, the United Kingdom, Germany, and China.

The first Royal Mint — NGC joint product begins with the availability of the Mayflower £2 gold and silver commemorative coins released to mark the 400th anniversary of the Mayflower crossing, which brought the first pilgrims to the New World in November 1620. The certified coins will be available directly from the Royal Mint with a limited presentation of 100 gold pieces and 500 silver pieces. For additional information, please click here for the silver option.