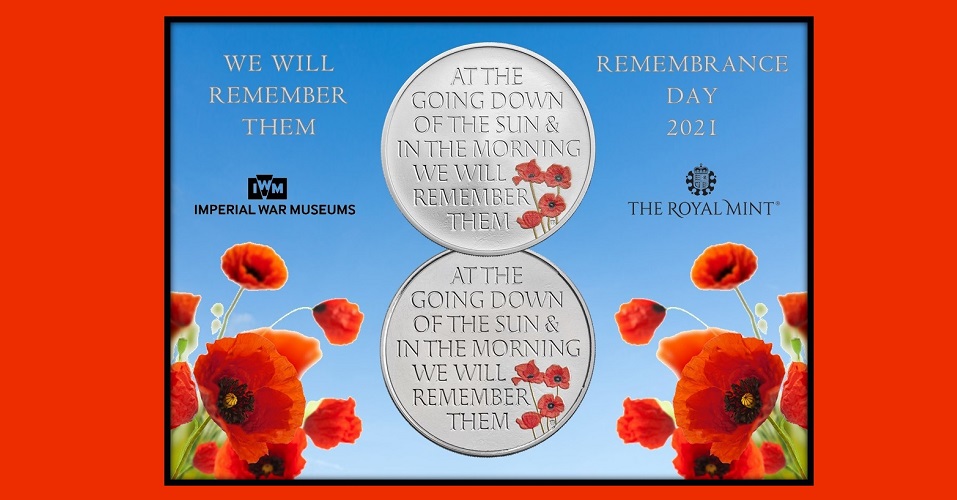 The Royal Mint, in collaboration with the Imperial War Museums, has released (11th October) new crown coins in tribute to Remembrance Day. The first Remembrance Day ceremony was held on the 11th November 1919, exactly one year after the signing of the Armistice with the Central Powers. Officiated by King George V, each Remembrance Day has been presided over by the reigning monarch of the United Kingdom ever since. Remembrance Day provides veterans and the public with an opportunity to come together to honour the service and sacrifice of the Armed Forces, veterans, and their families of both World Wars.

The day and ceremony itself is held at the Cenotaph, a war memorial on Whitehall in London. Initially a temporary structure erected for a peace parade following the end of the First World War, it was replaced in 1920 by the permanent structure seen today after an outpouring of national sentiment. Designed by Edwin Lutyens, the Cenotaph was thereafter designated the United Kingdom’s official national war memorial and has been replicated elsewhere in the United Kingdom and in other places of historical British allegiance including Australia, Canada, New Zealand, Bermuda, and Hong Kong. The solemn site serves as the primary location for the annual service of Remembrance Sunday, held on the closest Sunday to 11th November (Armistice Day) each year.

This year’s Remembrance Day commemorative coin features a reverse design created by the acclaimed artist Gary Breeze. Alongside symbolic red poppies, the coin carries an inscription from the famous fourth stanza of Laurence Binyon’s enduring poem For the Fallen, first published in the London Times newspaper on the 21st September 1914 as a tribute to those who died during the First World War:

They shall grow not old, as we that are left grow old
Age shall not weary them, nor the years condemn.
At the going down of the sun and in the morning
We will remember them.

The obverse side includes the fifth definitive effigy of HM Queen Elizabeth II created by Jody Clark and introduced onto all British circulation and commemorative coins since 2015. The denomination of 5 POUNDS and the year of release 2021 are included in the legend surrounding the Queen’s likeness.

The Brilliant Uncirculated cupro-nickel crowns are presented in a colourful folder which includes text pertaining to the Remembrance Day ceremony. Both the sterling silver crown and Piedfort crown are encapsulated and presented in a matte black custom case accompanied by a numbered certificate. For additional information, please visit the website of the Royal Mint.