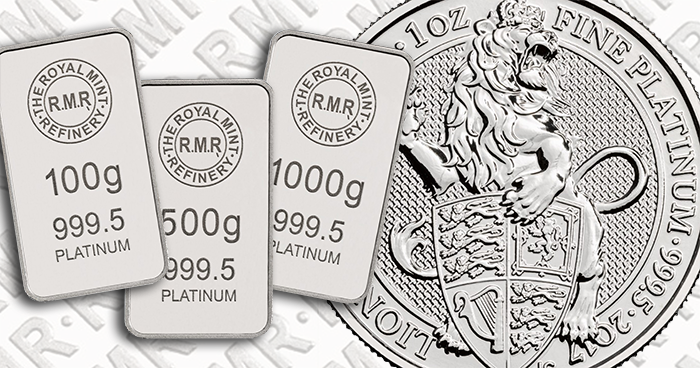 Monday (15th May) saw the launch of the Royal Mint’s 500-gram and 1,000-gram (1-kilo) platinum bars, which will be followed in the next few weeks by a 100-gram and a 1-ounce platinum bar, as well as a new bullion product of 1-ounce Queen’s Beasts–Lion of England coin—the first platinum coin to be launched in the popular heraldic series. The Royal Mint has timed its first entry into the platinum bullion market to coincide with London Platinum Week. The mint’s first-ever range of bullion platinum coins and bars was launched via bullion-trading platform www.royalmintbullion.com, and will be the first investment-grade platinum to be retailed by the Royal Mint. A strategic partnership with the World Platinum Investment Council (WPIC) to deliver the physical platinum products was announced in December 2016.

The Royal Mint–produced bars include ingots that carry the ROYAL MINT REFINERY (RMR) branding, along with their weights and fineness (.9995 platinum). The reverse shows the repeated initials RMR diagonally.


Chris Howard, the Royal Mint’s director of bullion, commented, “This is a new and exciting marketplace for us, and we look forward to working with the WPIC to expand the range of trusted Royal Mint Bullion products available to investors.”

David Crawford, program manager at the WPIC, said, “The Royal Mint is one of the world’s oldest and foremost authorities and issuers of bullion coins and bars, and we are honoured to be working with them. The partnership is the latest in a series of strategic initiatives from the WPIC to stimulate further investor demand for physical platinum, and increase the number and type of platinum investment opportunities available worldwide.”

The reverse of the new 1-ounce platinum coin, designed by Royal Mint coin designer Jody Clark, depicts the Lion of England, which is the first of the beasts to be introduced for this new coin series. The obverse includes the fifth effigy of HM Queen Elizabeth II, also designed by Jody Clark and first introduced on British coinage in 2015. The face value for the 1-ounce platinum coin is £100.

Please visit the Royal Mint Bullion website for additional information on the availability and range of its new platinum coins and bullion products.   ❑