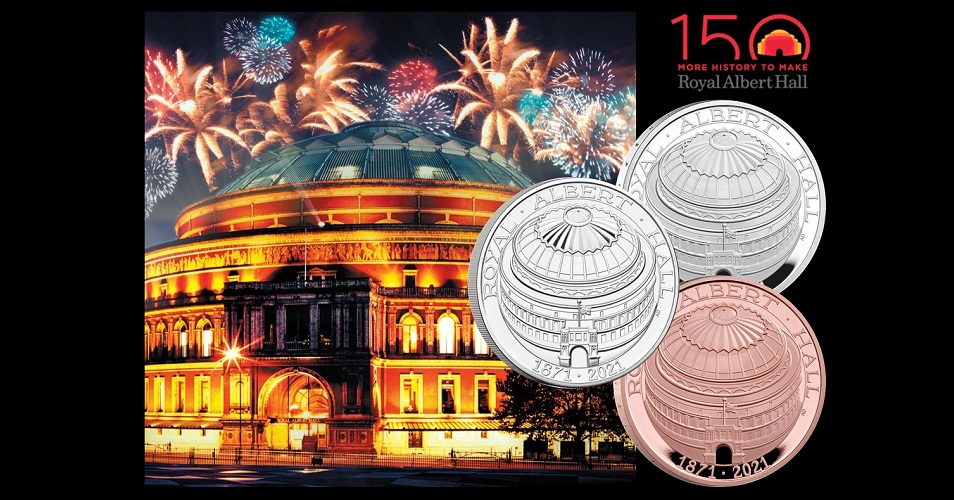 The Royal Mint has released (23rd March) new crown coins on the occasion of the 150th anniversary of the inauguration of one of the world’s most distinctive performance venues — the incomparable Royal Albert Hall. Located in the heart of Kensington, West London, the concert hall was inaugurated by Queen Victoria on the 29th March 1871 in memory of her beloved husband, the Prince Consort Albert, who had unexpectedly died a decade earlier.

However, on the 20th May 1867, Queen Victoria actually took part in the ceremony to lay the first foundation stone. Emotional and still deeply mourning her husband of 20 years, the Queen took the especially-made trowel in hand to lay the stone, as well as a glass time-capsule placed underneath it containing an inscription and a collection of gold and silver coins. It was at this moment when she famously announced that the building was to be called the Royal Albert Hall of Arts and Sciences, in memory of her beloved “Bertie,” deviating from its original name, The Central Hall of Arts and Sciences. From this moment, the Royal Albert Hall was borne and for the next 150 years, it has been at the centre of so many national celebrations, concerts, recitals, and royal performance galas.

During the Hall’s opening ceremony, and, in front of nearly 10,000 people, the Queen was visibly upset but still managed to say a few words:

I have to express my great admiration of this beautiful Hall and my earnest wishes for its compete success.

After her initial comments, the Queen then handed the opening of the Royal Albert Hall to her son, Albert Edward, the Prince of Wales, who later became King Edward VII in 1901. The unique round design and construction of the Royal Albert Hall has ensured the structure would continue to stand out among other concert halls anywhere in the world. At 135 feet (41 metres) in height and a with a circumference of 810 feet and exquisite décor on the edifice, this has made the Royal Albert Hall a greatly admired venue with both performers and audiences for the last 150 years.

Designed by acclaimed artist Anne Desmet RA, the reverse side features the iconic exterior of the Royal Albert Hall, the unmistakable architecture has been recreated in painstaking detail for the very first time. Above the primary design is the stylised text ROYAL ALBERT HALL and the commemorative years 1871 – 2021, which are placed below.

The obverse side of the RAH commemorative coins includes the fifth effigy of the Queen designed by engraver Jody Clark and introduced onto all British commemorative and circulation coinage in 2015. The denominations of all coins are also shown on the obverse. The incused edge inscription on the precious metal coin options reads INSPIRING ARTS AND SCIENCES, in reference to Prince Albert’s original vision for the venue.

The Brilliant Uncirculated cupro-nickel coins are presented in a blister-pak type folder with illustrations and informative text about the Royal Albert Hall’s anniversary and historic background.

The silver single and Piedfort Proof strikes are encapsulated and presented in a black branded custom case and accompanied by a numbered certificate of authenticity.

The gold Proof pieces are encapsulated and presented in a gloss-polished hardwood custom case, accompanied by a certificate of authenticity. For additional information about these coins and other coins available from the Royal Mint, please visit their website.

The Royal Mint will also be offering the UK’s first-ever domed commemorative coin to highlight the architectural beauty of the Royal Albert Hall in the coming weeks — you may register your interest in this product here.