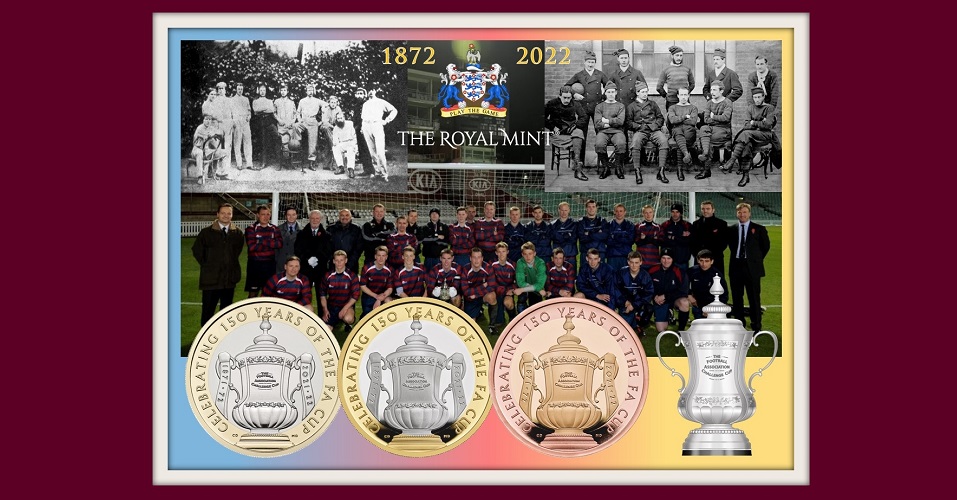 The Royal Mint has released (14th February) new £2 commemorative coins which remember the 150th anniversary of the first football match in the United Kingdom in which the coveted FA Cup was awarded. Long before the first meeting of the Football Association in the Freemasons’ Tavern on Great Queen Street in London on the 26th October 1863, there were essentially no universally accepted rules for playing football. From this meeting, the Football Association, or FA, became a reality responsible for facilitating all competitive football matches within its remit at the national level, and indirectly at local level through the county football associations. They would ultimately become responsible for appointing the management of the men’s, and later women’s and youth national football teams. However, the most famous element of the FA, in terms of competition, is the FA Cup.

Under the management of Charles Alcock (1842-1907), captain of the Harrow School Wanderers team, who was elected to the committee of the FA in 1866, he later became its first full-time secretary and treasurer in 1870. It was Alcock who masterminded the creation of the Football Association Cup in 1871, which is now the longest-running association football competition in the world. The Football Association Challenge Cup was proposed as a knock-out tournament open to all member clubs. 15 participating clubs who made up the FA subscribed to purchase a silver trophy. The first Cup Final was held at the Oval sports ground in London on the 16th March 1872, fought between the Wanderers, former private school boys whose name referred to their lack of permanent home ground, and the Royal Engineers, a strong British Army team, which was watched by 2,000 spectators. The Wanderers club beat the Royal Engineers 1–0 to become the first ever winners of the cup. During its short lifespan, the club went on to win the trophy a further four times before dissolving in 1887. Since then, there has been an FA Cup final every year with the exception of cancellations from 1916 to 1918 and again from 1940 to 1944, due to World War I and World War II, respectively. To mark the 140th anniversary of this historic match, it was replayed on the 7th November 2012 at the same venue. The result was a bit different from the game in 1872 with the Royal Engineers beating the reformed Wanderers 7-1.

Since its inception, the FA has had a ceremonial president, who, since 1939, has always been a member of the British royal family. The current president is HRH Prince William, Duke of Cambridge, who has been in this capacity since his appointment in 2007. It is the chairman of the FA who has overall responsibility for policy. Designed with the trophy at its heart, it is fitting that the new £2 coin will be used for the coin toss during the Final at Wembley in May.

The coins are designed by artists Matt Dent and Christian Davies, the coveted silverware, or FA Trophy, appears in miniature on the reverse side. The design is etched with a celebratory ribbon carrying the commemorative years 1871 – 72 on the left side of the cup and 2021 – 22 on the right side. The inscription CELEBRATING 150 YEARS OF THE FA CUP is placed above the primary design. On the milled edge of the £2 coin is the incused lettered inscription FOOTBALL’S GREATEST CUP COMPETITION.

The obverse side includes the fifth effigy of HM Queen Elizabeth II created by engraver Jody Clark and introduced onto British coins since 2015. The denomination of 2 POUNDS is included in the legend surrounding the Queen’s likeness.

The Brilliant Uncirculated bi-metallic base metal coins are housed in a blister-pak type folder with informative text and illustrations. The sterling silver Proof and silver piedfort coins with selective gold-plating are presented in a custom black vinyl covered case and the gold Proof coins are presented in a polished hardwood case. All are accompanied by a numbered certificate of authenticity. For additional information, please visit the website of the Royal Mint.