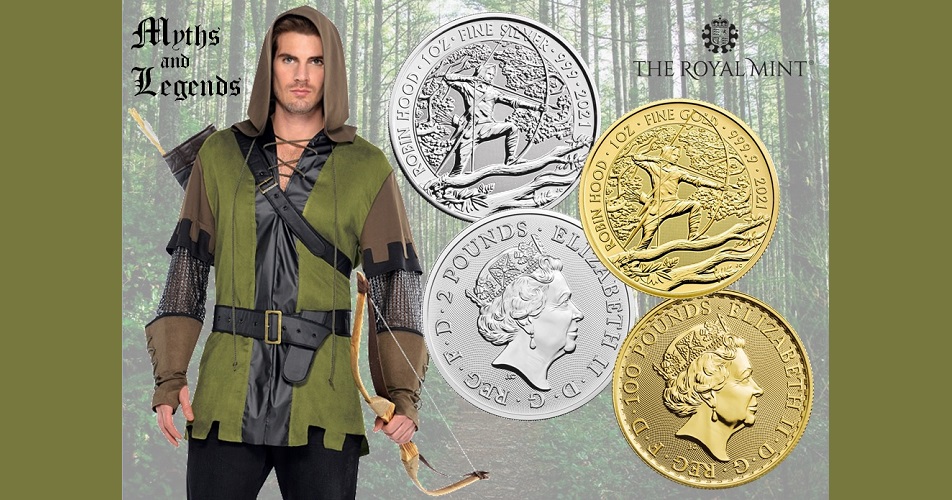 The Royal Mint has launched (15th March) a new gold and silver bullion product entitled “Myths and Legends,” which is inspired by a collection of tales originating from Britain’s rich past of storytellers. The first coins that launch the series are dedicated to the folklore of Robin Hood of Sherwood Forest.

According to legend, Robyn Hode of Locksley was a highly skilled archer and swordsman, and in some versions of the legend, he is depicted as a man of noble birth.

Robin became a popular folk hero ostensibly due to his generosity to the poor and downtrodden peasants. He was also known for his hatred of the Sheriff of Nottingham and his verderers — onetime English judicial officers in charge of the king’s forest, who enforced oppressive forest laws. Some chroniclers date his exploits as having taken place during Edward II’s reign, but other versions reference the king as Richard I, known as the Lionheart. Robin fought in the Crusades alongside the Lionheart before returning to England from the Crusades to find his lands seized by the sheriff.

Designed by Jody Clark, the first coin features a modern interpretation of Robin Hood, with a bow and arrow in each hand, ready to spring into action in Sherwood Forest. The text ROBIN HOOD 1 OZ FINE SILVER .999 or FINE GOLD 999.9 2021 is placed halfway around the primary design from above.

The coins’ obverse also includes the fifth numismatic effigy of Her Majesty Queen Elizabeth II, which was also designed by Jody Clark and in use since 2015. Each coin also includes a secure, micro-dot background texture, emphasising the craftsmanship and security associated with the Royal Mint’s gold products.

Two more coins inspired by the tale will follow, featuring the courageous heroine Maid Marian and Robin Hood’s trusted companion Little John. Each coin is individually packaged in a single coin capsule. For additional information about these coins and other bullion-related products from the Royal Mint, please visit their website.