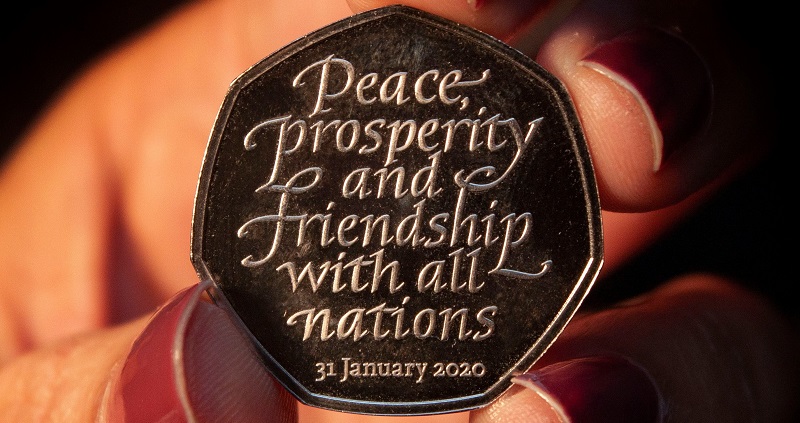 Her Majesty’s Treasury has announced that the commemorative 50-pence coins minted to mark the departure of the UK from the European Union are scheduled for release on Friday, the 31st January — the day of the country’s actual departure.

In the wake of the landslide election on the 12th December of incumbent Prime Minister Boris Johnson, who assumed the premiership in July 2019, he was able to pass his proposal for Britain’s exit from the single market, which the United Kingdom joined in 1973 when it was then referred to as the European Economic Community (EEC). He signed the agreement into law — which received royal assent from Her Majesty Queen Elizabeth II on the 24th January. The final agreement was also signed by Ursula Von der Leyen, the new president of the European Commission on the same day, paving the way for the UK to effectively leave the EU on the 31st January, three and a half years after the initial referendum which posed the option to UK voters. The European Parliament is expected to give its final approval for the Withdrawal Agreement on Wednesday, the 29th January.

The coins, which were delayed twice previously due to the design that includes the actual day of departure, were ordered to be produced by the treasury in March 2019 and October 2019 — both consignments consisting of 1,000 prototypes dated “29 March” and over one million pieces dated “31 OCTOBER” were ordered destroyed or recycled. These coins will be the third “BREXIT” consignment and the fourth time in which an EU-themed design will be released for circulation. The first being when Great Britain joined the European Economic Community in 1973, the change-over to the European Union in 1992, and when the UK held the rotating EU presidency in 1998.

The reverse design includes a simplified, stylised script which reads:

Peace, prosperity and friendship with all nations,

The words are borrowed from writings that partially quote America’s third president and author of the U.S. declaration of independence, Thomas Jefferson. The treasury has confirmed about three million Brexit coins will enter circulation around the United Kingdom from Friday, with a further seven million to be added later in the year. Sajid Javid, who is Chancellor of the Exchequer — Finance Minister, as well as Master of the Mint, was given the first batch of coins by the Royal Mint and will present one to Prime Minister Boris Johnson this week. As part of the launch of the coin, the Royal Mint will open the doors of its South Wales HQ for 24 hours on the 31st January from midnight to 11:59 p.m. to allow visitors to the mint’s visitor’s centre to strike their own commemorative Brexit coins.