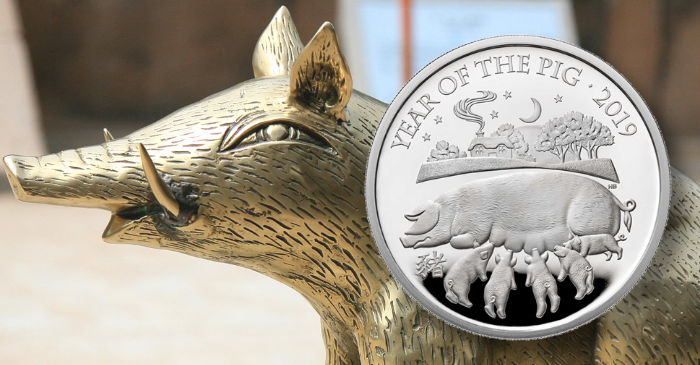 The Royal Mint has officially launched (20th September) their long-awaited 2019 Lunar New Year collector coins, which have been issued since 2014 and include designs corresponding to the Chinese zodiac. The new 2019-dated coins are in celebration of the Year of the Boar, or Pig.

The tradition of assigning an actual or mythical animal to one of the lunar years within a 12 year cycle is a very old custom and this series lends a unique British angle to this ancient tradition. During the Lunar New Year, and throughout many countries in the Far East, it is common to exchange tokens and gifts of money in red envelopes symbolising good wishes for the recipient’s health, wealth, and prosperity. According to the Lunar calendar, 2019 will be the Year of the Pig. The pig is the last sign in the 12-year zodiac, meaning the cycle will start anew in 2020 with the Year of the Rat.

The Lunar Year of the Pig is designed by artist and craftsman Harry Brockway, an artist and craftsman living in Somerset, England, who, as a wood engraver is used to working on a very small scale. He trained as a sculptor at the Royal Academy in London and went on to work as a stonemason for many years, producing architectural stone carvings for churches, cathedrals, and prestigious buildings throughout the UK.

Being asked to create designs for coins was not a difficult leap for him to make. As a stone carver and maker of memorials, he often works in bas-relief and cut letters in stone. Harry says that he enjoys the challenge of working within such strict parameters, combining image and lettering to produce a coherent and satisfying design.

Were you born under the year of the Pig? Check below and find out:

The reverse side includes the unusual, but heartwarming depiction of a sow along with her five piglets. Above the primary focus is a farmer’s house in the evening hours, with smoke wafting from the chimney and the moon and stars out in the night sky. To the left of the sow is the Chinese character referencing the Year of the Pig. Above the overall design is the text YEAR OF THE PIG 2019.

The obverse includes the fifth effigy of HM Queen Elizabeth II, as created by Royal Mint engraver Jody Clark, and has been used on all United Kingdom circulation and many commemorative coins since the portrait was unveiled in 2015.

The mintage numbers for each of the seven options include the number eight at least once, as it is thought to be lucky in some Asian cultures, and each option is available for purchase as a separate item.

Custom presentations vary according to metal and size, with all variations including a booklet detailing the coin and background about the 12-year lunar cycle. For additional information about these coins and others available from the Royal Mint, please visit their website.