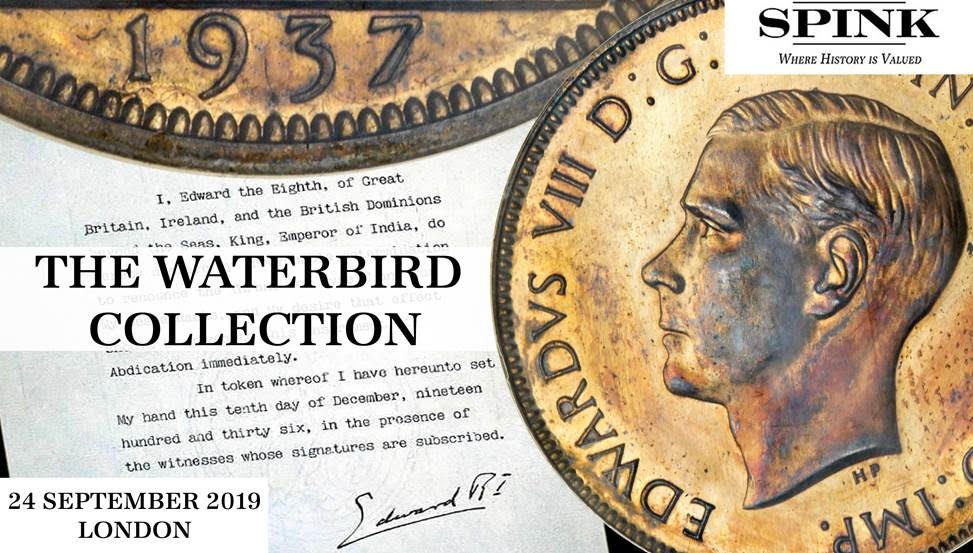 An exceptionally rare Pattern penny struck during the brief reign of King Edward VIII is set to be auctioned later in September. The coin, whose sale is to be arranged by Spink, London, is regarded as a “Pattern” and dated “1937,” was one of a tiny handful of trial coins that were quietly produced by the Royal Mint in anticipation of Edward VIII’s coronation, which would have occurred in May 1937. That event never happened since the 42-year-old monarch famously chose love over national duty in order to marry his twice-divorced companion, the American Wallis Simpson. In a radio broadcast on the 11th December 1936, the soon-to-be-former King announced to a stunned nation and the Commonwealth that he would step down in favour of his brother:

I have found it impossible to carry the heavy burden of responsibility and to discharge my duties as King as I would wish to do, without the help and support of the woman I love.

After his signature on the Instrument of Abdication, King Edward VIII was conferred with the title of HRH Prince Edward, Duke of Windsor, and made preparations for his life as a former sovereign along with his new wife. As a consequence of the King’s abdication and a reign of just 10 months, the Crown was inherited by his second eldest brother, HRH Prince Albert, Duke of York, who ascended the throne as King George VI in tribute to his father King George V. In 1952, after a reign of just over 15 years, George VI died and was succeeded by his eldest daughter, the present Queen Elizabeth II.

Prior to the King’s personal crisis making headline news, plans were underway at the Royal Mint to introduce a new series of circulation coinage in time for the King’s coronation. Designs were selected, and an effigy had to be decided on — with input from the King himself. As tradition dictated, the effigy of the successive monarch would be depicted facing in the opposite direction from the previous. As King Edward VIII pointed out that the part in his hair would not be visible with his likeness facing to the right, he suggested his effigy face left — contrary to the long-practised tradition. As members of the government, the Prime Minister, and Chancellor were aware that the King was facing the choice of love or duty, production of the planned Edward VIII coinage ground to a halt. However, some pattern and model pieces were still being produced. So secretive was the production of these coins, including the work of their designer Thomas Humphrey Paget and C.W. Coombes from autumn 1936, that their existence was not confirmed even to members of the royal household until June 1938.

It also became known that Edward, Duke of Windsor, after his abdication, petitioned the Royal Mint for a set of “his coins” following the 1950 discovery. The decision was deferred to his brother, King George VI, who declined his request. Ironically, therefore, no “Edward VIII” coins appeared at the sale of the Duke of Windsor’s personal effects in New York in 1998. Consequently, an entire set of Patterns representing the current denominations and a new coin, the brass, 12-sided three-pence coin was added to the royal collection. Any remaining Patterns were then collected together and stored in the safe of the Deputy Master of the Royal Mint.

Upon this official’s death in September 1950, an inventory was taken of his safe in which the Pattern coins were rediscovered with the note: ‘

Not to be opened except in the presence of two senior officers of the Royal Mint.

A second set of coins was then created from this group and given as a gift to the national collection at the British Museum, in London, with further pieces completing the trays of the Royal Mint museum’s own collection in Llantrisant, Wales. The few remaining pieces, all of different denominations, were then privately transacted with collectors, although it was not until the 1970s that any example of Edward VIII’s coins actually appeared on the open market. Spink, the London auctioneers, have previously handled most of these coins, all of which are considered as exceptional rarities by numismatists, and a true “holy-grail” addition to any coin collection. 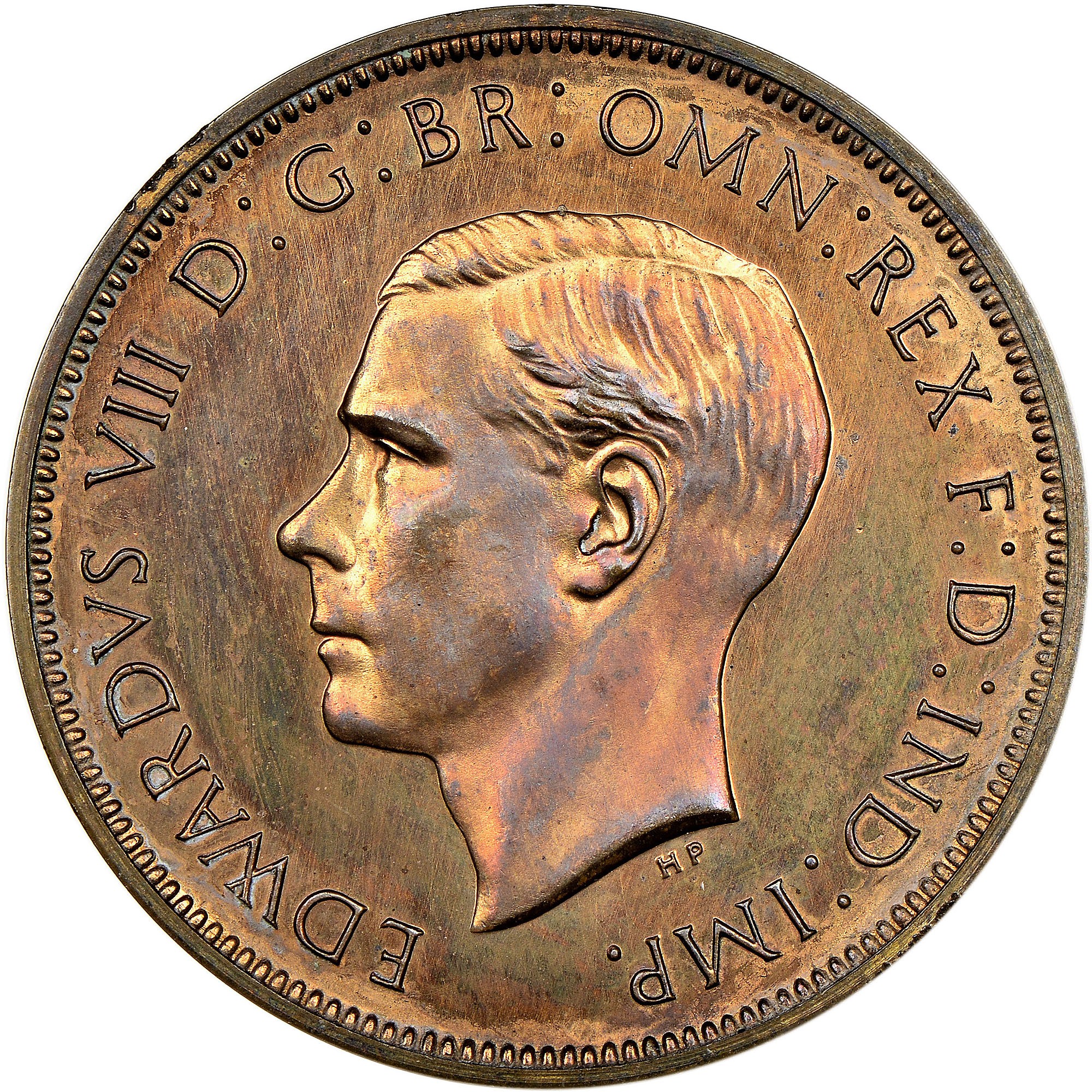 This trial coin, never released for circulation as a result of the King’s abdication in December 1936, is appearing for the very first time at a UK public auction. It is anticipated to fetch more than £60,000 (U.S. $72,000). Only one other example of a 1937 Pattern penny is in private hands and currently resides in the United States of America. Since very few people are fortunate enough to possess an example of Edward VIII’s coinage, many collectors are captivated by its unique historical mystique which transcends their own private collecting world. 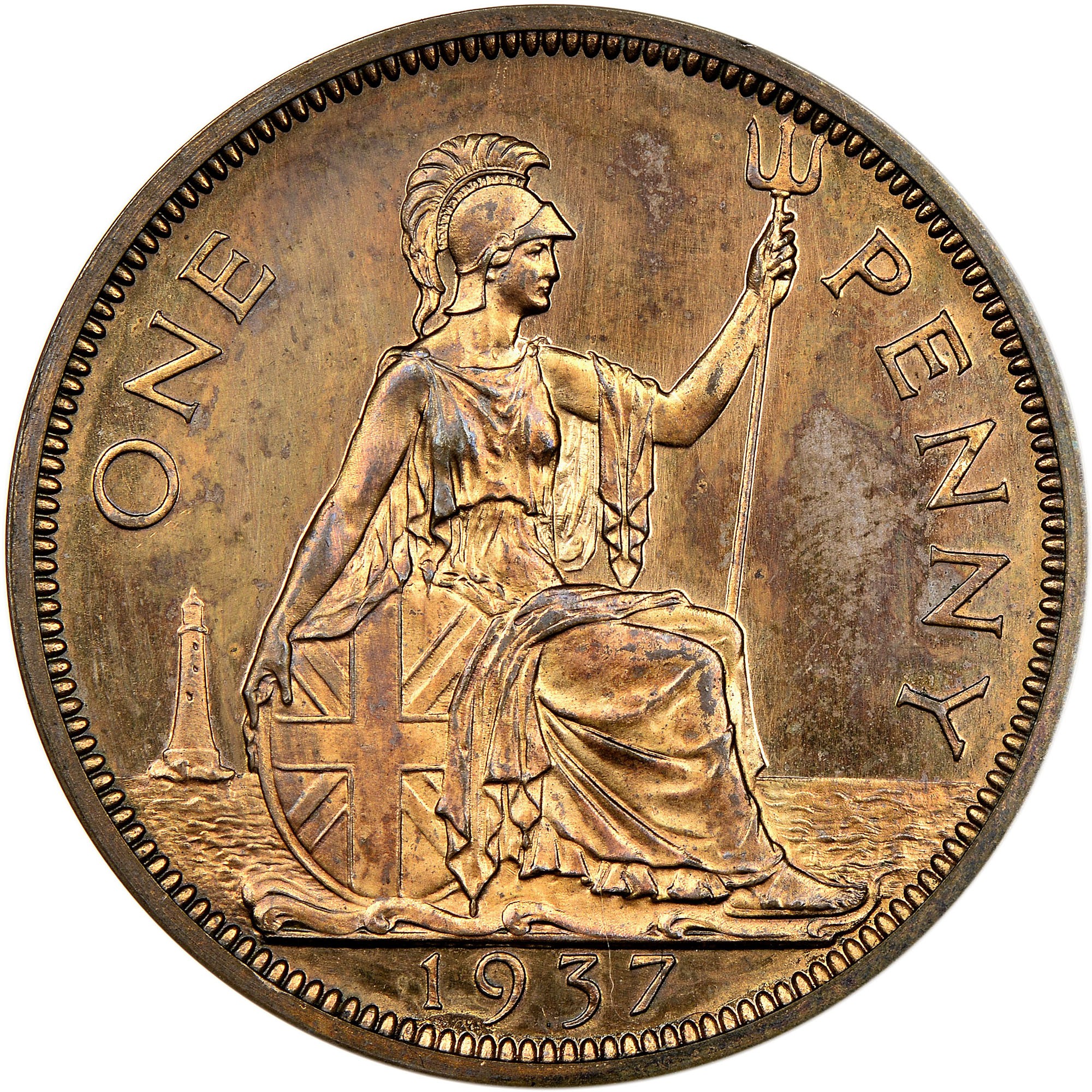 The coin, which is designated as lot number 63, will come under the hammer on the 24th September 2019 at the offices of Spink, London, which is internationally renowned as a numismatic auctioneer. Spink also has extensive previous experience of handling other scarce Pattern coins of Edward VIII. For additional information about bidding, please contact: