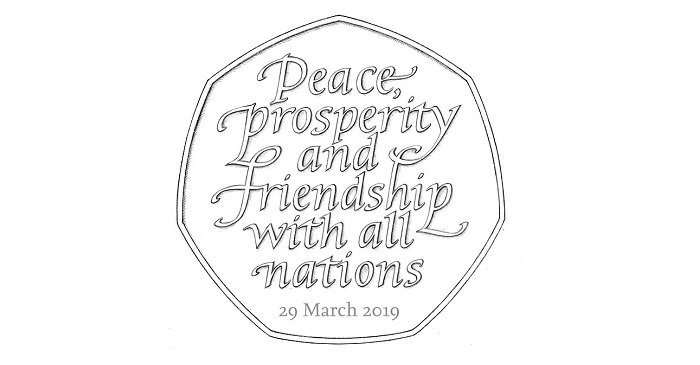 It was confirmed by Her Majesty’s Treasury on the 18th March that commemorative coins meant to mark the day that the United Kingdom would officially leave the European Union will be delayed, in terms of their production and release. On the 29th October of last year, the treasury announced there would be commemorative 50-pence coins released for the historic occasion. In keeping with three other commemorative coins issued in 1975, 1992, and in 1998, all of which carried designs that were EEC or EU related, the denomination chosen was the 50-pence.

The proposed design of the reverse side of the coin included the date 29 MARCH 2019, when the UK was scheduled to leave the EU, but there is growing speculation this date will need to be extended. There has been a substantial delay in forging ahead with an agreed deal between the United Kingdom and the European Union regarding how the two entities would continue the movement of trade and goods, capital, and people from both sides. The British Parliament has voted to petition the EU for an extension date to determine if a deal can be reached, with the likely date now being the 30th June 2019.

The announcement of the issue of a “Brexit” coin was mentioned in October 2018 during the annual budget speech by Finance Minister Philip Hammond, who is referred to as the Chancellor of the Exchequer in the House of Commons. He confirmed at the time that the treasury will authorise the design and minting of a commemorative coin. The coin will, in itself, not reference Brexit but instead include the date of departure and include a message that partially quotes America’s third president and author if the U.S. declaration of independence, Thomas Jefferson, with the words Peace, Prosperity, and Friendship with all nations.


A spokesman from HM Treasury reiterated:

The commemorative 50-pence coin to mark the UK leaving the European Union will be made available following our departure.

The spokesman also confirmed that no coins with the date ”29 March” have been produced for sale and commented that it is standard procedure for the Royal Mint to produce a minimal number of test coins ahead of a proper production run. Collectors who are interested in buying this commemorative coin at a later date can register their interest on the Royal Mint website as with other commemorative coins.