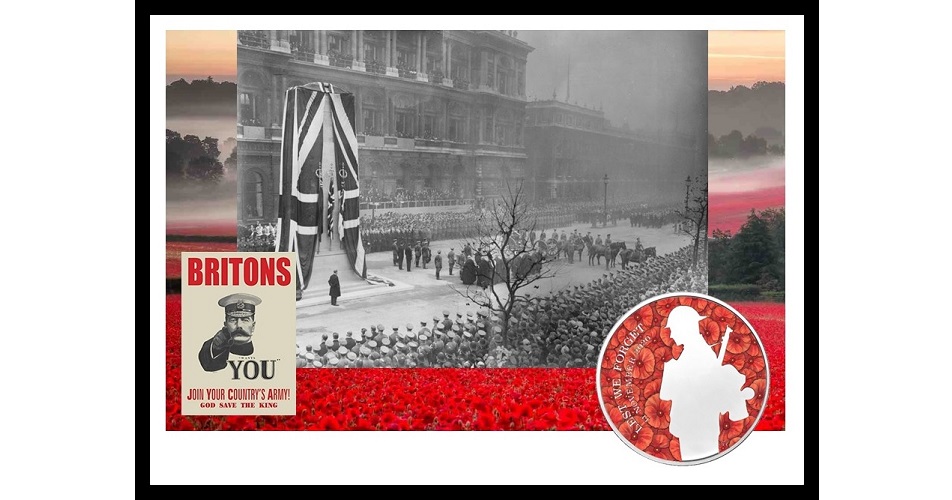 The Royal Mint, in collaboration with the Imperial War Museum, has released (26th October) new silver colour Proof coins to commemorate Remembrance Day 2020. This year’s theme is in remembrance of the centenary anniversary of the internment of the first Unknown Soldier, the unidentifiable soldier who represented nearly one million soldiers who lost their lives serving on the battlefield on Britain’s behalf as a result of the First World War fought between the years 1914 to 1918. The Remembrance Day commemorative coin, however, is a poignant reminder of the brave men and women who serve in Britain’s Armed Forces — past and present.

The year previously, a temporary focal point in Whitehall was built for a military parade dedicated to the first anniversary of the end of the Great War to pass by. The idea for a permanent memorial became very popular with many who wanted to pay homage to their loved ones lost on the battlefields during the fighting and the Cenotaph became a reality in 1920. Positioned on Whitehall in London, this memorial has become the central focus for the remembrance and commemoration events in Britain since King George V laid a wreath at the Cenotaph on the 11th November 1920. The word “Cenotaph” means “empty tomb,” which symbolises the unprecedented losses suffered during the First World War and is dedicated to the glorious dead.

The coin’ reverse side is created by Natasha Preece, coin designer at the Royal Mint. Using the latest innovative technology, the vividly red-coloured poppies that feature on the coin have been digitally printed to add the intense colour that is commonly associated with the flower.

Poppies are arranged against a touching incused silhouette of a soldier facing left; his head bowed in observance of his comrades who lost their lives on the battlefield. The inscription placed to the left of the Soldier reads LEST WE FORGET 11 NOVEMBER 2020.

The Royal Mint commemorates the 100th anniversary of this poignant national event by honouring the Unknown Soldier on an official UK coin for the first time. Each Brilliant Uncirculated cupro-nickel crown is presented in a colourful folder, which includes images and informative text about the design and background behind the anniversary.

A donation from each purchase of these commemorative coins will be made to Imperial War Museums, to support their valuable work and ensure that the stories of those who have lived, fought, and died in conflict since 1914 continue to be heard. For additional information about these coins and other coins offered by the Royal Mint, please visit their website.