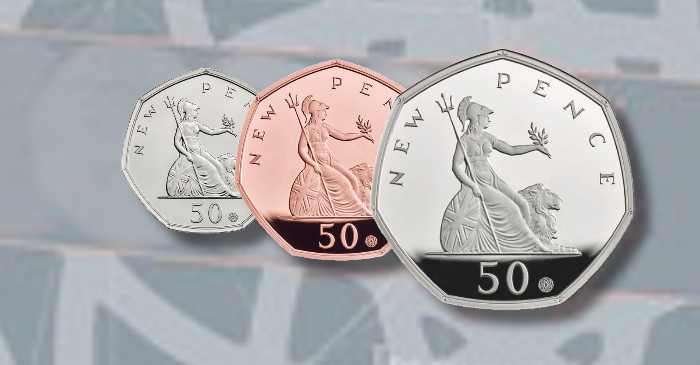 The Royal Mint has released (24th September) new commemorative coins which celebrate the 50th anniversary of the first issue of the country’s still distinctive and now iconic seven-sided 50-pence coins. As the United Kingdom revised their currency system in 1971 to adopt a decimal system, a new denomination was to emerge. A coin was proposed which would be placed into circulation to replace 10-shilling notes (or a half-pound) and was approached with great enthusiasm. The proposed 50-new pence would be produced in 1969, well before the country’s official change-over date of February 1971. Initial models included 10 and 12-sided versions, and there was even a square model with rounded corners. However, the Royal Mint developed a unique seven-sided shape which would stand out from other coins in circulation. The shape went through some refinement and took on a distinctive round edge, removing inconvenient sharp points which also reduced the rate of wear and increased its practicality with vending machines, which were then coming into increasing use in day to day commerce. The new 50-pence coin had a proposed weight of 13.5 grams of cupro-nickel and would have a diameter of 30 millimetres.

Since the production of decimal coinage in 1968, the obverse side of the coin included an elegant effigy of HM Queen Elizabeth II created by British artist Arnold Machin (1911–1999), which was already in use on new five and 10-pence coins. The question of what the reverse side would look like came into focus next. Would the reverse side of the new coin carry the British coat of arms or a seated version of Britannia? As the only coin in circulation that included Britannia was being removed from circulation, the old version one-penny coins, it was decided that Britannia — the allegorical figure of the nation should transition onto the new 50 pence denomination — and it was the design created by Sir Christopher Ironside that was chosen. His rendition of Britannia seated alongside a lion was considered among his best work. The new design was accompanied by the words NEW PENCE and the numeral 50.

Officially released on the 14th October 1969, the coins made quite a splash with the public, but many were not well-impressed with this new addition to their coin purses. Shopkeepers, bus conductors, and ordinary members of the public began to point out that in spite of its distinctive shape, it was too easily confused with the 10-new pence coin — or even worse — the soon-to-be redundant half-crown. Over time, the coin began to reach extensive circulation, and the 10-shilling banknote was less frequently used. When the United Kingdom officially introduced the decimal system, 50-pence coins were in use for more than two years, becoming a familiar coin with the British and often retained as a keepsake with visitors. The first commemorative design of this denomination was released in 1975 on the occasion of a referendum held to confirm the UK’s admission into the European Economic Community (EEC). The next commemorative reverse would not make an appearance until 1992 with the UK’s assumption of the European Union rotating council’s presidency. Since then, the coin has been issued with many reverse commemorative designs, including 29 different representations in 2011 for the Summer Olympics, which were hosted in London the year later. The coin remained in circulation without changes to its specifications until 1997 when they were reduced to 27.3 millimetres in diameter and eight grams in weight. A total of four effigies of the Queen have also been included on the obverse. 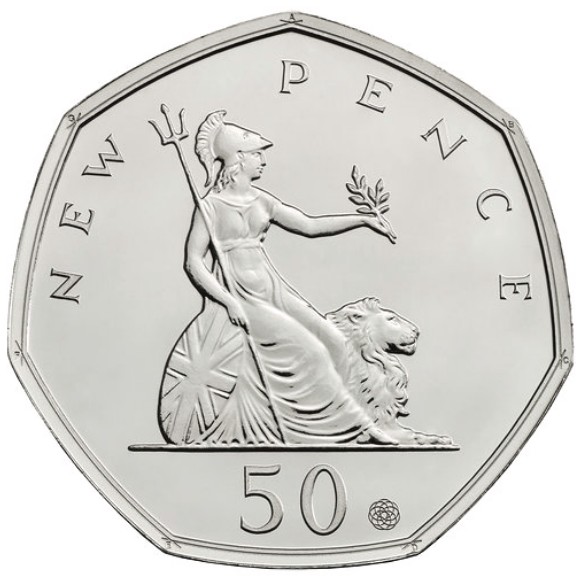 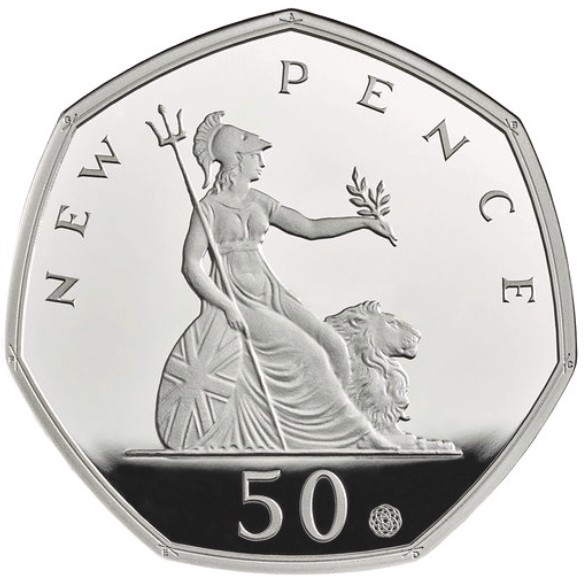 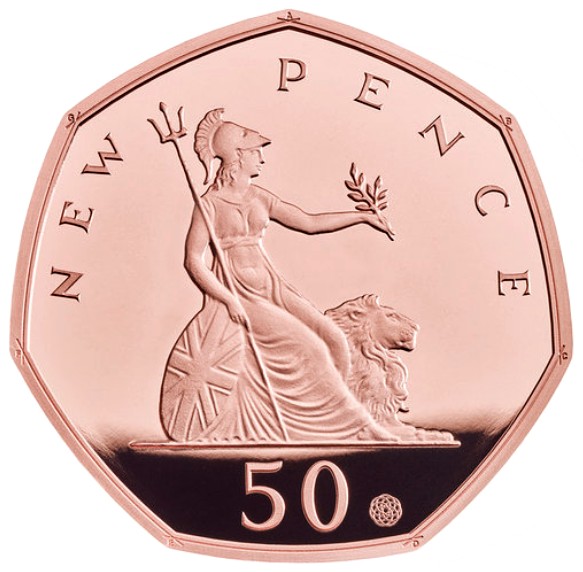 The 2019-dated commemorative coin reintroduces the original seated Britannia design complete with the word NEW, which was removed from subsequent issues since 1983. Of particular importance to the commemorative design is the inclusion of the letters A to G, which appear on each point on the outer rim of the reverse, and are joined by an arched crossing line. Each coin also bears a special privy mark in the shape of a Spirograph-type design drawn from an extension of lines forming the 50-pence shape, a first for any British 50-pence coin. 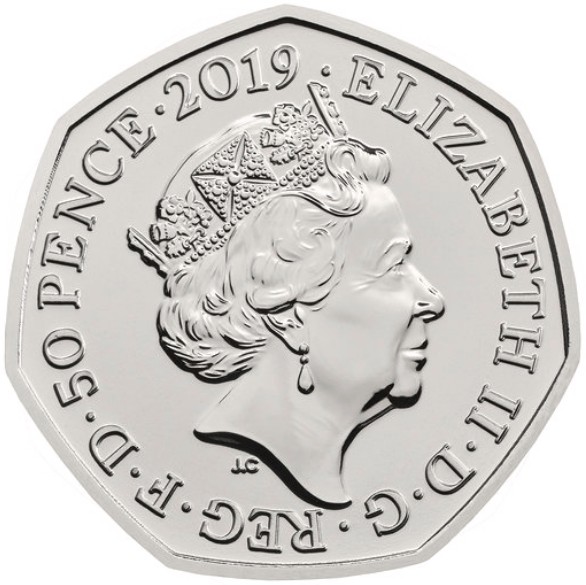 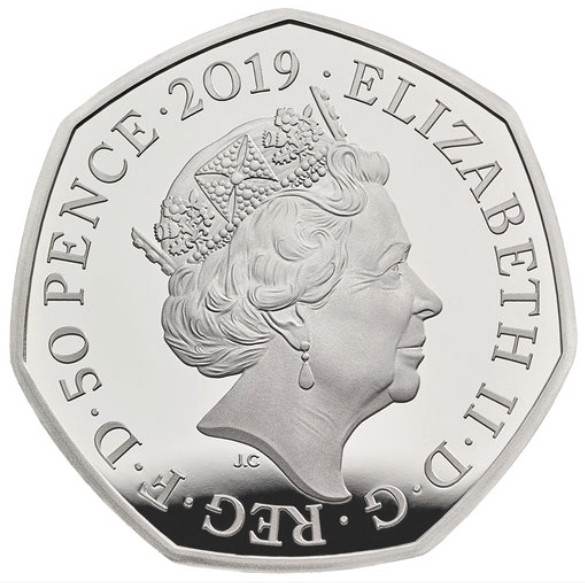 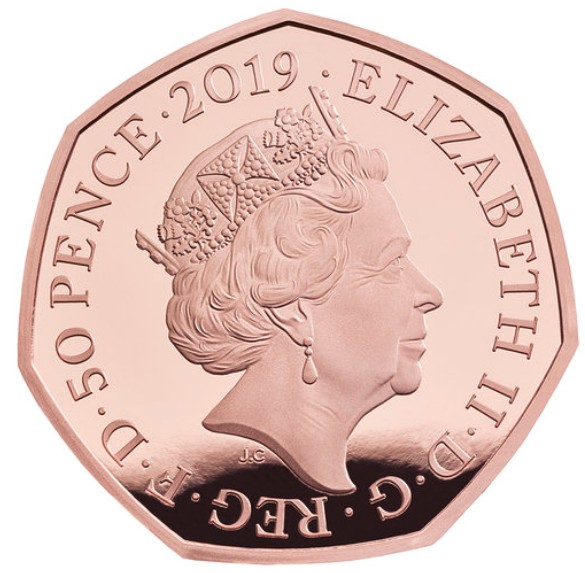 The obverse includes the current and fifth effigy of HM Queen Elizabeth II created by Royal Mint engraver Jody Clark and has been present on all circulating British coinage since 2015. 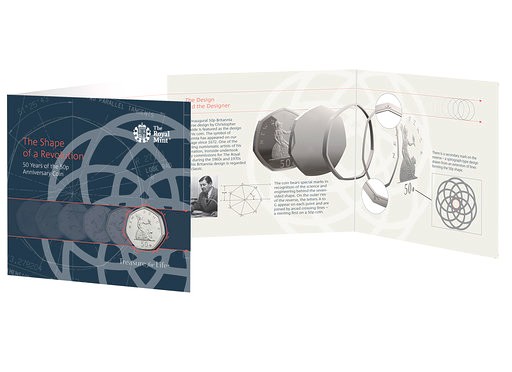 The cupro-nickel coins specifically with this design will not be released into general circulation and are only available as separate purchases. 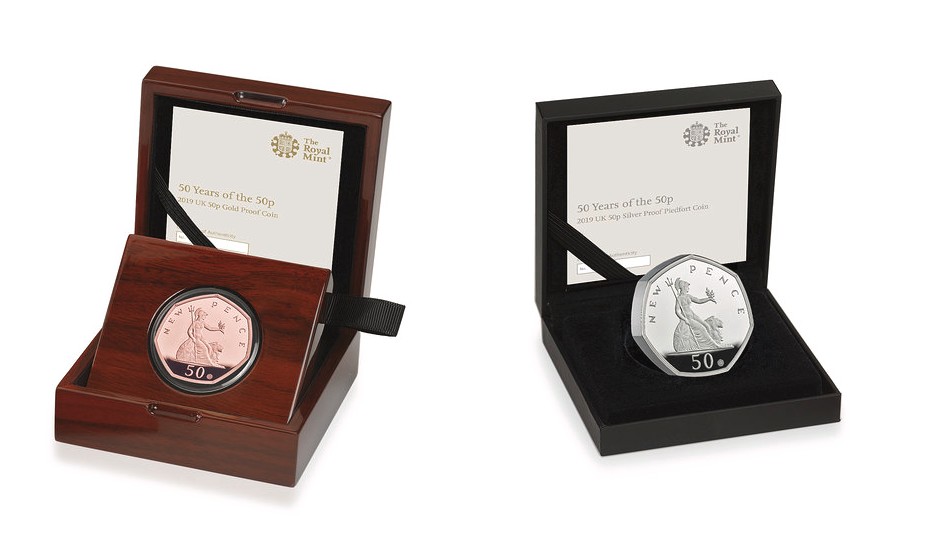 The coins are also available in silver Proof and piedfort or gold Proof examples as part of the “strike your own coin” available at the Royal Mint Experience, the Royal Mint’s visitor complex in Llantrisant, Wales. For additional information about these coins and others available from the Royal Mint, please visit their website.