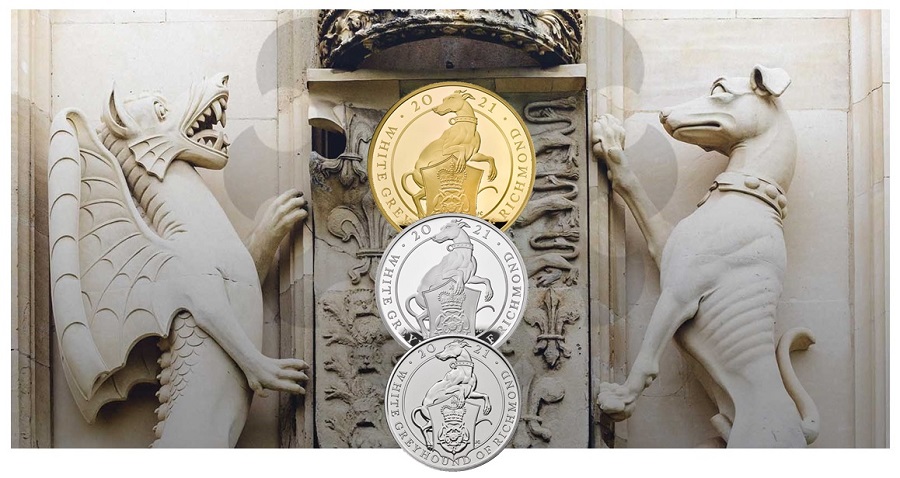 The Royal Mint has launched (17th September) the 2021-dated gold and silver collector’s edition of the immensely popular series entitled “The Queen’s Beasts,” first launched in 2016. The series of coins highlights both actual and mythical creatures often depicted in traditional and classic heraldry. This particular series was inspired by the 10 ancestral beasts that lined the entrance to Westminster Abbey at Her Majesty’s coronation in June 1953. The ninth coin features the White Greyhound of Richmond, which has been explicitly remodelled for the series. The skilful blend of heraldic symbolism and dynamic realism is prominent with each commemorative coin design forming part of the Queen’s Beasts collection, and the White Greyhound of Richmond commemorative coin is no exception. A depiction of the greyhound was first used as a royal beast by King Edward III whose reign of 50 years from 1327 to 1377 was one of the longest in English and British history.

A symbol associated with qualities such as fitness and skill, as well as faithfulness and loyalty, the greyhound was closely associated with the House of Lancaster. The greyhound later became a symbol of the Tudor family when it was bestowed on Edmund Tudor by his half-brother Henry VI. After slaying Richard III at the Battle of Bosworth in 1485, Edmund’s son was crowned Henry VII as England’s first Tudor monarch. It was the use of the white greyhound in his crest that displayed both his Tudor and Lancastrian ancestry which denoted his right to rule. Henry VII used a version of the Royal Arms featuring the White Greyhound of Richmond, a powerful heraldic expression of the ancestry that denoted his right as King of England. The Tudor dynasty ruled England until the death of Elizabeth I in 1603. However, a kinsman of the Tudors inherited the English throne in the person if King James VI of Scotland, who ruled as James I of England, and it is his lineage that extends to our present Queen, who is a direct descendant of both King Henry VII and James I.

The reverse side of the coins is designed by Jody Clark, who, by using images of racing dogs as the basis of his creation, has achieved elegance in the design whilst also conveying the strength and power of the greyhound breed. The upstanding hound supports a crest or shield which displays the crowned Tudor rose emblem. This element is often seen on the designs of British coinage, more recently on the previous design of 20-pence circulation coins from 1982 until 2008. The text surrounding the primary design reads WHITE GREYHOUND OF RICHMOND along the lower edge with the year 2021 shown above the design.

The obverse side includes the fifth effigy of HM Queen Elizabeth II also created by Jody Clark and introduced on all British circulation and commemorative coins since 2015. The denominations of the coins from 2 POUNDS to 1000 POUNDS are included in the legends surrounding the Queen’s likeness.

The cupro-nickel Brilliant Uncirculated coins are presented in a blister-pak folder with illustrations and informative text.

The gold and silver Proof quality coins are encapsulated and presented in a selection of custom cases according to their metal. They are all accompanied by a numbered certificate of authenticity.

The £10 10-ounce silver coin option is minted as a Piedfort strike. The new range is available directly from the Royal Mint and in limited presentation editions. For more information about this coin and other coins offered, please visit their website.