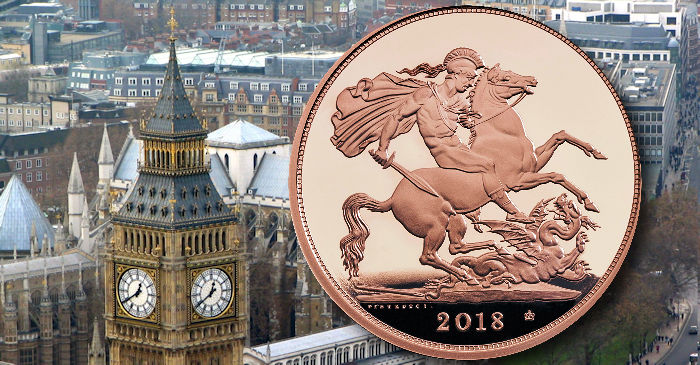 The Royal Mint has struck a series of gold sovereigns which are specially produced to remember the 65th anniversary of Her Majesty the Queen’s coronation. The celebratory editions of the 2018-dated sovereigns, the “Coins of the Monarch,” feature a special mintmark depicting a royal crown with “65” entwined in the design.

The regal “65” mintmark was specially created for the occasion by Royal Mint coin designers Natasha Preece and Joseph Melia, and can be found as part of Benedetto Pistrucci’s legendary effigy of St. George slaying the dragon on the reverse of this series of sovereign coins. The size, style, and placement of the mark were carefully considered to make sure they complemented Pistrucci’s classic and iconic motif.

The story behind the Pistrucci sovereign has become legendary in British numismatic history, which in 2017 celebrated the 200th year of the introduction of the design for gold, and later, silver coinage. In the early 18th century, the effects of the Napoleonic Wars and a chronic shortage of silver meant that the United Kingdom’s circulating coinage was in poor condition. The Great Re-Coinage Act of 1816 was the result of these financially destructive wars and precipitated the replacement of gold-based coinage, and that of the guinea in circulation since 1663, with new gold and — for the first time since 1787 — silver circulation coins.

The re-coinage and exchange of 1816–17, which introduced or re-instated a gold sovereign equal to 20 shillings and silver crown coins of five shillings, would transform the nation’s economy, resulting in greater scrutiny — as well as greater efficiency — than ever before. The Royal Mint had moved to a new location in Tower Hill, equipped to meet the new demands with modern steam-powered machinery which produced exemplary coinage in terms of quality, design, and security. Alongside this activity, legislation would formalise the gold standard, setting out the coins to be produced and the standards to which they would be struck. The new sovereign (or pound) coin circulated alongside the 21-shilling gold guinea for a time, which was to be expected, but it was essential that the sovereign was distinctive from the existing gold coin.

The chosen reverse design was the instantly recognisable motif of St. George slaying the dragon created by Benedetto Pistrucci, whose work is now acknowledged across the world as a masterpiece. While the sovereign has deviated from the iconic St. George depiction at times, it always returns to this now 200-year-old design.

The sovereign for 2018 will include the additional mink or privy mark of the numeral “65” superimposed over a small depiction of St. Edward’s crown. This very crown was used at the coronation of the Queen on the 2nd June 1953, as the Queen was crowned by the Archbishop of Canterbury. The assembled guests shouted “God save the Queen!” three times at the exact moment St. Edward’s crown touched the monarch’s head. The crown is placed just to the left of the year date which appears under the depiction of St. George on the quarter-, half-, one-, and double-sovereign coins, and on the right side of the year for the £5 gold piece. The obverse of the sovereign coins features the fifth definitive effigy of Her Majesty, created by Royal Mint engraver Jody Clark. The effigy was introduced in 2015 and has been used on all British circulation coinage as well as on many collector and commemorative coins since. 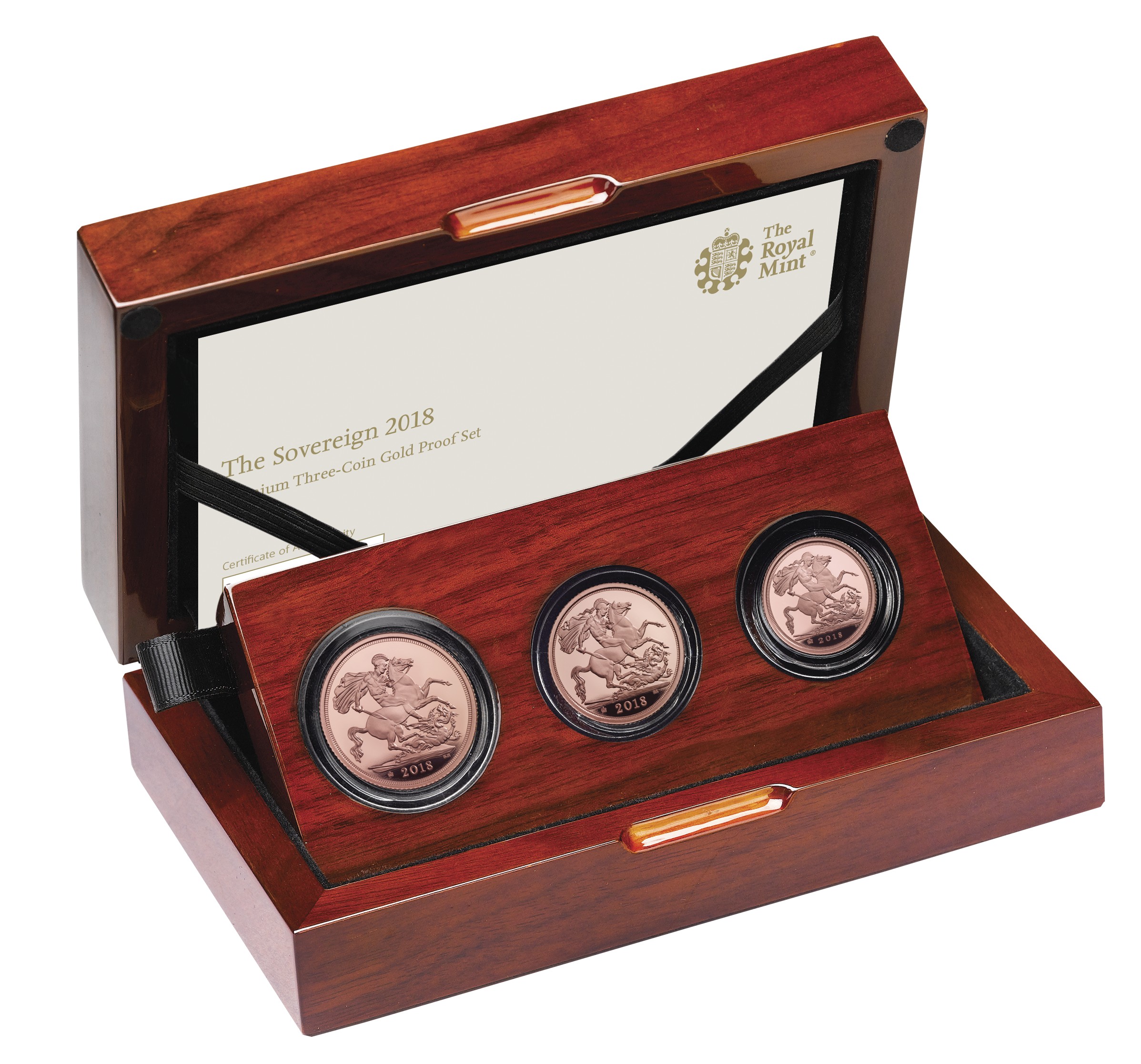 The 2018 gold Proof £5 coin is available only as part of the Sovereign 2018 Five-Coin Gold Proof Set. The double sovereign is available only as part of the five-, four-, or three-coin Proof set. The quarter-, half-, and one-sovereign coins are available in all options of coin sets, including specially presented three-coin sets, or they can be bought separately. For additional information on these and other coins released by the Royal Mint, please visit their website.

The Genius of Benedetto Pistrucci and His Iconic Design

Benedetto Pistrucci (1783–1855), a native of Rome, Italy, came to London in 1815 under the patronage of the prince-regent, later King George IV. He was relatively unknown in Britain, but his reputation attracted interest and he quickly found sponsors and supporters of his work. Soon after his arrival, his engraving talent was recognised, as he was given the prestigious task of creating the designs for the new gold and silver coins of George III, which were part of the country’s new overhaul of the coinage system that was introduced in 1817.

Pistrucci’s rendition of the story of St. George slaying the dragon has become synonymous with the sovereign. He created an interpretation that defied the medieval image of St. George, instead opting for a more classical or Greek interpretation — bare and muscular — not weighed down with the usual chain mail and armour. The inscription HONI SOIT QUI MAL Y PENSE, a Latin motto meaning “Evil unto him that thinks evil of it,” has featured on the coat of the royal arms of the United Kingdom for centuries, encircling the primary motif, and was used on both the gold sovereigns as well as the first year of the new silver crown coin. The motto, which was inscribed on a belt or ribbon motif, was removed after 1821.

As chief medalist, Pistrucci went on to design the portraits of Kings George III and George IV that appeared on gold sovereigns and for the new silver crown of five shillings, among other coins and medals — many considered masterpieces during Pistrucci’s lifetime. He died in 1855 and was buried in Surrey, where his prominent gravestone cites his title as “Her Majesty’s Chief Medallist.”