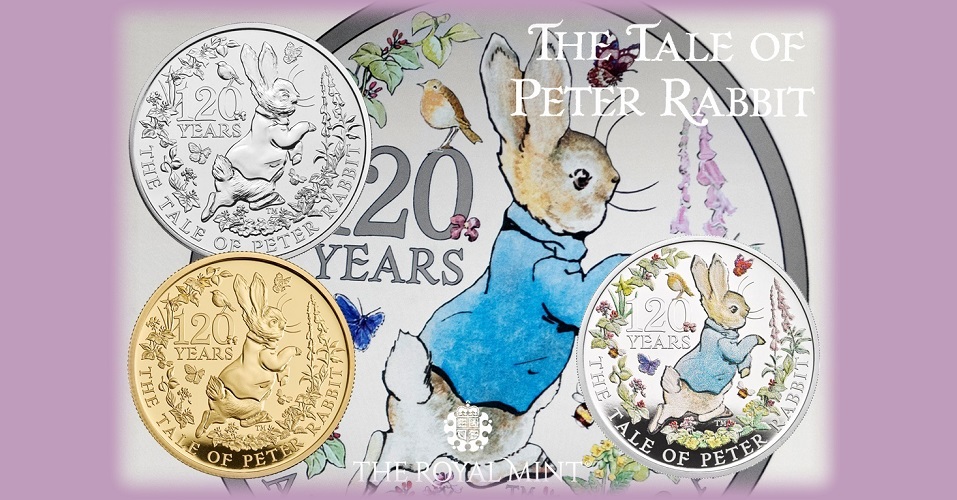 The Royal Mint has released (4th April) new gold and silver Proof coins in celebration of the 120th anniversary of the first publication featuring that mischievous but lovingly disobedient rabbit Peter, dressed in a blue coat. The new crown coins follow the successful programme of 50-pence and £5 collector coins featuring the characters of Beatrix Potter first released in 2016. Peter Rabbit was in fact the very first literary children’s character to appear on a Royal Mint coin.

Created by children’s author Beatrix Potter (1866–1943), her story about the young rabbit whose innocent disobedience leads to trouble was first published in 1902.

The coins feature Beatrix Potter’s original illustrations which are re-modelled by artist Ffion Gwillim. The primary design highlights Peter Rabbit surrounded by wildflowers, bees, and butterflies. The commemorative text placed below the central design and along the edge reads THE TALE OF PETER RABBIT, with the additional text 120 YEARS placed just to the left of the primary design.

The obverse of each option features the fifth definitive effigy of Her Majesty Queen Elizabeth II, designed by Jody Clark and in use on all British commemorative and circulation type coins since 2015. The denomination and year of issue also appear on the obverse as part of the legend surrounding the Queen’s likeness.

Both the Brilliant Uncirculated and colour versions are presented in a colourful sealed folder with informative text and imagery of Peter Rabbit. Each of the gold and silver Proof coins are encapsulated and presented in a selection of hardwood high-gloss cases (gold) or lucite display cases (silver), accompanied by numbered certificates of authenticity. For additional information about this collector series, please visit the Royal Mint’s website.