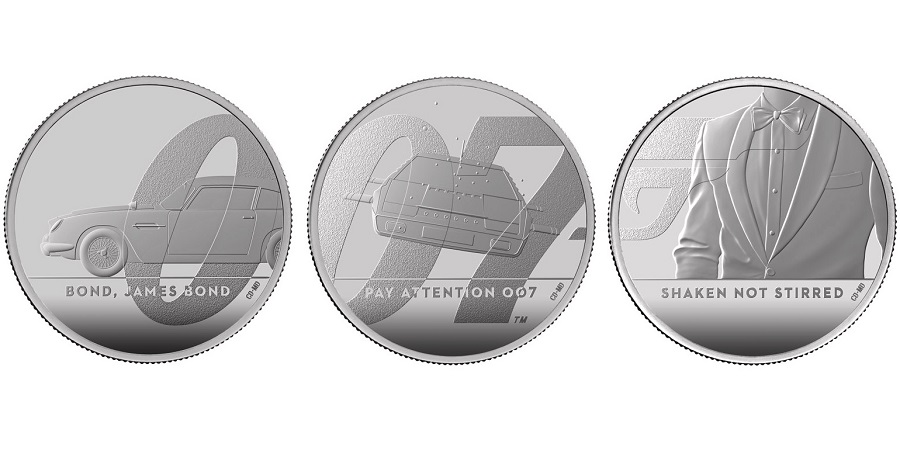 The Royal Mint has released (2nd March) a new range of collector coins which features the world’s most well-known and best-loved undercover agents, James Bond. Created by author and journalist Ian Fleming (1908–1964) in the same year as Queen Elizabeth II’s accession, much of his reference to Britain’s secret intelligence service was gained while working for Britain’s Naval Intelligence Division during the Second World War. Fleming was involved in planning Operation Goldeneye, an Allied plan during the Second World War to monitor Spain and a possible alliance between Francisco Franco and the Axis powers. Fleming’s wartime service and his career as a journalist provided much of the background, detail, and depth of the James Bond novels. The literary character and franchise have been adapted for television, radio, comic strips, video games, and motion picture feature film, in particular.

The James Bond Special Issue Range commemorative coins are released ahead of the worldwide debut of the 25th James Bond film, No Time to Die. The collection includes a number of Royal Mint firsts, a seven-kilo gold coin, which is the largest coin with the highest face value to be produced in the mint’s 1,100-year history and the world’s first James Bond ingot bars in gold and silver, featuring all of the 25 official James Bond film titles.

Just one seven-kilo gold coin will be created, which has been designed by Royal Mint artisan Laura Clancy as part of the James Bond Special Issue range. The collection also includes two-kilo gold, one-kilo gold, and five-ounce gold and silver coins. The primary design includes the Aston Martin DB5 model automobile centre stage. A combination of traditional engraving methods and modern techniques have been applied to the production of the seven-kilo gold coin. CNC engraving machines are used to cut the design onto the coin carefully, and finally, the coin is then hand-polished to ensure the finish is elevated to the highest possible standard, and finally, areas of the relief design are frosted using laser cutters.

The James Bond Core Range of coins includes gold and silver options and are designed by artisans Christian Davies and Matt Dent. The theme of the collection features three separate coin designs which, when placed together, reveal the famous 007 motif. The first coin from the series has the profile of the classic Bond car, the Aston Martin DB5. The two remaining coins feature the famous submarine car that appeared in The Spy Who Loved Me and James Bond’s iconic jacket and bow tie.

The James Bond Inspired Innovation Range consists of two coin options, gold and silver, and as part of their designs include micro-text of the 25 film titles which require a magnifying glass to read.

The three coin designs are available in several editions, from Brilliant Uncirculated base metal to precious metal silver and gold Proof. Furthermore, the Inspired Innovation editions include micro-text of the 25 film titles and require a magnifying glass to read.

The first coin Bond, James Bond, 2020 UK half-ounce and one-ounce gold and silver Proof coin, and base metal £5 crown coin are available now. The remaining coins will be available for dispatch in May and June 2020.

The Gadgets, the Theme, the Suits and the Cars.

In terms of their general appeal to a wide-ranging audience, the suave and debonair Bond made use of a variety of exotic equipment, gadgets, and vehicles, which often prove to be critically useful. It was a near guarantee that every piece would be invaluable to Bond in the field and matched situations exactly to fit the use of the gadgets assigned to him.

Written by Monty Norman, the theme music which has featured in every film since 1962, is familiarly known as the “James Bond Theme” and was first orchestrated by the John Barry Orchestra for Dr. No. It is perhaps one of the world’s most recognisable pieces of music which when just the first few notes are heard, instantly conjures up images of the listener’s favourite Bond actor and film. The theme has been described as a bebop-swing vibe coupled with the characteristics of vicious, dark, distorted electric guitar and an instrument of rock ‘n’ roll. The theme represents everything about the character most notably that of a confident, dark, dangerous, suggestive, sexy, and unstoppable secret agent who is licensed to kill. Aside from the signature theme, the last 24 films were accompanied with theme songs sung or performed by some of the music world’s most renowned artists.

Throughout the film series, Bond has displayed a certain elegant sense of style and flair. His suits are custom-fitted and classically designed with a very British look and cut. His casual style is also always more a country gentleman or squire, but dependent on the actor portraying Bond on screen, the look of 007 was more fitting to the decade and age of the actor, recently offering a more athletic appearance and persona. During the last 25 films, Bond has also had a great influence on the dress sense of many men, setting trends and popularising an array of clothing items from trilby hats to white dinner jackets.

In the early Bond stories, Fleming gave Bond a battleship-grey Bentley 4.5 litre roadster as well as a Mark II Continental Bentley, which was mentioned in the remaining books. However, Bond’s most famous car is the silver-grey Aston Martin DB5, first seen in Goldfinger; which was also featured in Thunderball, GoldenEye, Tomorrow Never Dies, Casino Royale, Skyfall and Spectre.

The Man Who Always Gets the Girl

For Queen and country. Although the suave James Bond remains the ultimate unattainable man, he is very successful at acquiring attractive women — many of them his adversary. However, in his personal life, he is only interested in casual relationships and never truly gives himself to any of his partners. He is charming and irresistible, but he always keeps a part of himself, only to himself. One exception to this rule was in the 1969 film On Her Majesty’s Secret Service when James Bond married the character Tracy Draco, but she was shot and killed in a drive-by shooting by his arch-enemy Blofeld and his henchwoman Irma Bunt — on their wedding day.

And, of Course, the Ever-Present Martini: “Shaken, Not Stirred”

In Ian Fleming’s 1953 book, Casino Royale, possibly the most famous drink order in history was extremely precise, combining gin and vodka with dry vermouth. It’s a very potent mix, and Fleming, via his character Bond, is very specific about brands for two of the ingredients involved. Whatever the ingredients, the method of serving consists of the bartender shaking the mix with ice, which is actually a good thing because it dilutes the drink, which is very heavy on the alcohol.