The world and its diverse population were brought closer together in the heavens and cosmos above when two seemingly different programs were united with just one spontaneous deed of goodwill. While both initiatives seek to unite the world’s population, one with the co-operation of the International Space Station, the other through a coin with the United Future World Currency’s (UFWC) initiative, there was one unusual turn of events with a difference. Both programs came together when Paolo Nespoli, an Italian astronaut with the European Space Agency and chosen as one of the three person crew aboard the Soyuz TMA-20 which docked with the International Space Station, packed a little something extra for the ride. 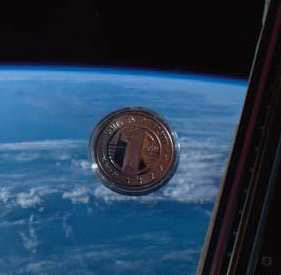 In the wake of NASA’s last ever mission of the Space Shuttle, it was recently revealed that Flight Engineer Nespoli brought along a 17 gram, silver prototype coin minted by the IPZS (Italian State Mint) in limited quantity for the UFWC ostensibly as a good luck charm. A silver example was given to Flight Engineer Nespoli by the UFWC’s founder, Dr. Sandro Sassoli shortly before his lift-off as a good luck charm. Mr. Nespoli confirmed to Dr. Sassoli at a recent reunion between the two that he had indeed taken the coin with him and as such, the coin accompanied him for the 159 day mission while he was a resident of the International Space Station from December 2010 to May 2011.

Dr. Sassoli, founder and general coordinator of the UFWC initiative commented: “The aim of the International Space Station and of UFWC are actually one and the same, to link all countries and people of the world with the motto, unity in diversity. I am so enthusiastic of this achievement of Paolo’s which though his good deed launches a message of real unity and brotherhood.” 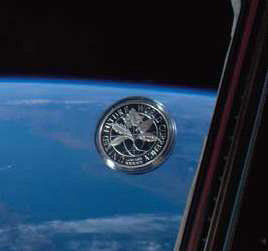 Flight Engineer Nespoli’s amazing photographs clearly show both sides of the encapsulated half ounce silver coin floating in zero-gravity space with the stunning backdrop of the earth providing a spectacular image. The coin’s legend, “UNITY IN DIVERSITY” is visible as well as the UFWC’s own “Tree of Life” design. This event is of great interest for both coin collectors and space enthusiasts alike. Paolo has had quite a following regarding his experience aboard the International Space Station with
his tweets and photographs. He is the one and only astro_paolo on Twitter.

Both versions of the 2009 dated first issue coins are eagerly sought by coin collectors due to the publicity surrounding their initial launch when Russian President Dimitry Medvedev’s enthusiastically endorsed the UFWC initiative in front of the world’s media. Further prototype coins have since been produced in several world mints including the Royal Mint in the UK, the Italian State Mint, and the Casa De Moneda in Mexico with several other projects planned for the remainder of 2011 and well into
2015 in time for “EXPO MILANO 1015”.

For more information about the United Future World Currency, please visit their dedicated website at: www.futureworldcurrency.com