At the time of Sheikh Zayed’s birth, the sheikhdom of Abu Dhabi was one of seven Trucial States, or group of tribal confederations located along the lower coast of the Persian Gulf, and was a British protectorate from 1820 until the 1st December 1971. In 1968 the United Kingdom announced its intention to end its protectorate over the Trucial Coast. The principle of union was first agreed between the ruler of Abu Dhabi, Sheikh Zayed bin Sultan Al Nahyan, who had succeeded as ruler of Abu Dhabi in August 1966, and the ruler of Dubai. Bahrain and Qatar were to drop out of talks, leaving only six emirates to agree on union on the 18th July 1971. On the 2nd December 1971, Abu Dhabi, together with Dubai, Sharjah, Ajman, Umm Al Quwain, and Fujairah joined in the Act of Union to officially form the United Arab Emirates. The seventh emirate, Ras Al Khaimah, joined the union on the 10th February 1972.

Sheikh Zayed bin Sultan Al Nahyan was elected the Emirate’s first president of the union by the Federal Supreme Council on the same day the treaty took effect. The term of office officially lasts for five years but as the ruler of Abu Dhabi customarily also holds the presidency of the UAE, the office is de facto hereditary, and as such, upon the death of Sheikh Zayed, Khalifa bin Zayed Al Nahyan succeeded his father on the 3rd December 2004. 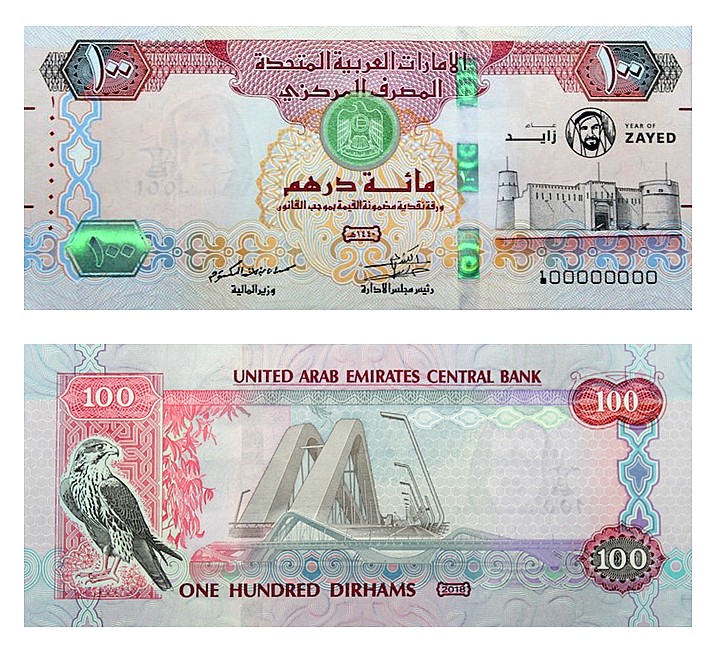 The predominantly red note with dimensions of 155 millimeters by 66 millimers is produced at the Central Bank of the United Arab Emirate’s new printing facility located in the Khalifa Industrial Zone of Abu Dhabi, which is operated by the Oumolat Security Printing Company. The face of the note depicts the Al Fahidi Fort in Dubai, which is seen to the right half of the note. The commemorative note resembles the same note introduced into circulation earlier this year, but also includes the logo celebrating the centenary of the Zayed Anniversary, and is placed above the image of the Al Fahidi Fort. The year of issue is shown in Arabic numerals and is placed just below the denomination of the note.

The back design differs from the ordinary circulation type 100-dirham note since it includes an image of the Sheikh Zayed Bridge designed by the late Zaha Hadid, and is a suspension bridge known for its intricate construction and dramatic lighting, which was first constructed in 2007. The 842 meter-long, 64 meter-high, and 61 meter-wide bridge between Abu Dhabi Island and the mainland was completed in 2011, and its structure consists of several arching waves of reinforced concrete which support a four-lane highway. The year of issue is shown below the depiction of the Zayed Bridge in western numerals. 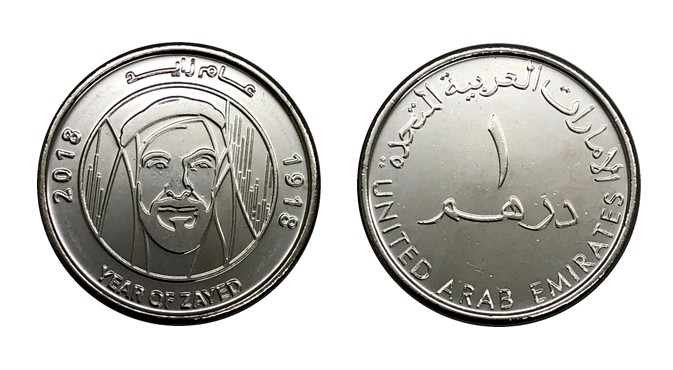 A circulation-type one-dirham coin has also been authorised and released by the Central Bank, which includes the stylised effigy of Sheikh Zayed bin Sultan Al Nahyan on the obverse and is modelled on the official logo celebrating the centenary anniversary. The specifications of the coin are the same as the currently circulating dirham and the reverse design remains unchanged.