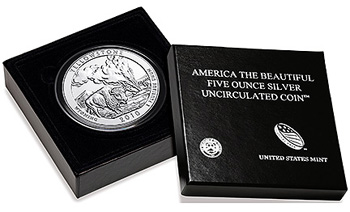 The coins replicate the design of the Yellowstone National Park Quarter on a 3 inch, five ounce, .999 fine silver coin. The issue had a limited mintage of 27,000 pieces, which were struck by the United States Mint before the close of last year. The numismatic coins feature the “P” mint mark and have a special vapor blasted finish.

The 2010-P Yellowstone Five Ounce Silver Coins first went on sale May 17, 2011 at 12:00 Noon ET. The initial pace of orders was strong with more than 18,000 coins purchased by the close of the day. After five days of availability, sales had risen to 24,626. In the most recent sales report, an updated figure was not made available.

Collectors have been enthusiastic about the coins due to their limited mintage and unique nature. The US Mint imposed an ordering limit of just one coin per household in order to ensure the broadest distribution possible.

The next coin in the series feature Yosemite National Park has been scheduled for release on June 9, 2011. The details of the offering have not yet been officially confirmed, but the prior two issues were priced at $279.95 each and went on sale at 12:00 Noon ET.