Based on information posted on their website, the United States Mint has now received sufficient orders to meet the 27,000 mintage for the 2010-P Hot Spring National Park Five Ounce Uncirculated Coins. The US Mint will continue to accept “waiting list” orders, which will only be fulfilled in the event that coins become available due to order cancellations. 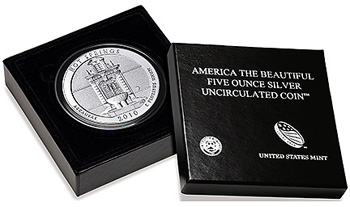 Initial demand for this product offering was so strong that it took down the US Mint’s website when sales began on April 28, 2011. Within a few days sales had reached 25,000, suggesting an imminent sell out. However, a sharp decline in the price of silver seemed to cool collector appetites for the five ounce silver coins. Sales continued for a full two weeks from the initial release date before orders reached 27,000.

The Hot Springs National Park design features the facade of the park headquarters building with a fountain in the foreground. On the obverse is a portrait of George Washington designed by John Flanagan for the 1932 Washington Quarter. Each coin includes edge lettering “.999 FINE SILVER 5.0 OUNCE”.

These numismatic versions of the coin include the “P” mint mark and have a special finish created through a vapor blasting process. The mintage of 27,000 is lower than the mintage of the previously released bullion version of the coin, which was 33,000.

The next America the Beautiful Five Ounce Uncirculated Coin featuring Yellowstone National Park will go on sale May 17.