Sales of the 2011 Ulysses S. Grant Presidential Dollar Coin Cover began at the United States Mint earlier this week on June 29, 2011. This is the eighteenth release in the ongoing American Presidency $1 Coin Cover series. 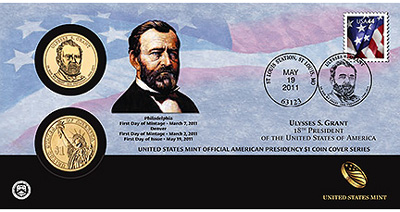 Each cover includes two Ulysses S. Grant Presidential Dollars from the first day of production at the Philadelphia and Denver Mints. The dates of production were March 7, 2011 at Philadelphia and March 2, 2011 at Denver. The coins are mounted within an illustrated envelope that is stamped and canceled for the first day of circulation release, May 19, 2011, St. Louis, MO.