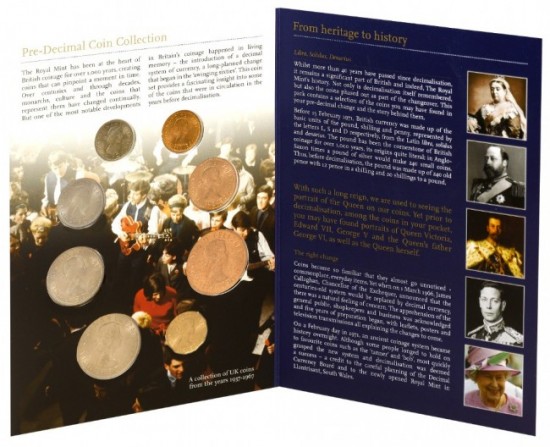 The Royal Mint has launched a full set of coins issued before British decimalization took place in 1971. The coins are re-packaged in a colorful new folder with details about the coins’ design and specifications.

Decimalization took effect on the February 15th, 1971, after more than five years of preparation and planning. The project successfully transitioned the United Kingdom from the centuries-old pounds, shillings, and pence system of coinage – in which 12 pence made one shilling and 20 shillings equaled one pound sterling –and implemented a simpler 100-pence to 1-pound ratio. The old system had been in place since the Roman occupation of Britain and had over the years undergone several reforms and changes, but none more so than in 1971.

Substantial change had not occurred on British coinage since silver was removed from the five higher denominations in 1947. The task of changing over the coins to meet the demands of a large and growing population (which neared 50 million in the late 1960s) would require a new facility that was large and technically advanced enough to produce the requisite coinage. The decision to push ahead with decimalization was also accompanied by the decision to relocate the Royal Mint to a new industrial park of its own outside Cardiff in Wales.

The coins’ appearances, their specifications, and denominations had been decided on; with this in place, a new portrait of the Queen sculpted by Arnold Machin was unveiled along with reverse designs created by Sir Christopher Ironside. It would not be until 2009 that these iconic designs would be replaced, making these reverse designs some of the longest to be consecutively used on British coinage.

The Treasury announced that only the old 1- and 2-shilling coins would follow into the new system and be re-denominated as 5 and 10 pence coins. The Royal Mint started producing these coins in 1968 and circulated them alongside their shilling counterparts until both versions were removed from circulation in 1990 and 1992, respectively, to be replaced with smaller versions. The old penny and the half penny were also replaced with smaller versions. In total, six coins were placed into circulation on Decimal Day with the half pound or 50 pence piece—enough money for lunch for the ordinary office worker at the time—being produced from 1969 onward. 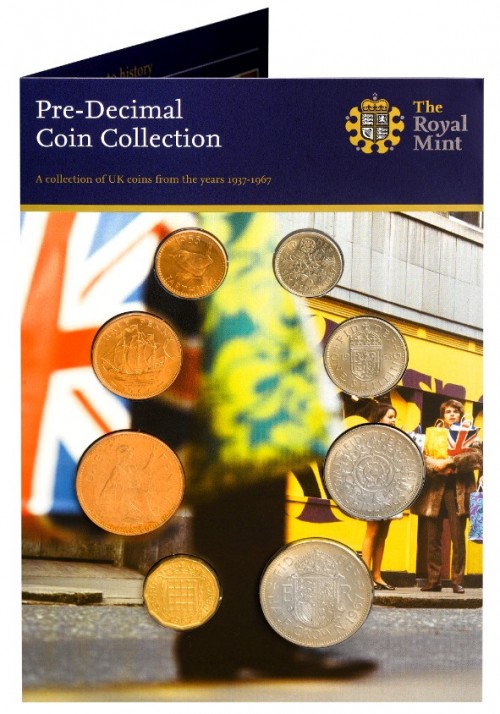 The coin set includes the half crown, 2 shillings or florin, 1 shilling, 6-pence, 3 pence, 1 penny, 1/2 penny and a farthing (1/4 penny), which had been discontinued in 1956 due to its low purchasing power. Eight coins in all, they are presented in a colorful folder with illustrations and historical background on the coins. The coins included are dated between 1937 and 1967; each bears an effigy of King George VI or the first portrait of Queen Elizabeth II.

For more information on this and other coin sets offered by the Royal Mint, please visit their Web site.  Information is offered in English, with international orders dispatched where applicable.