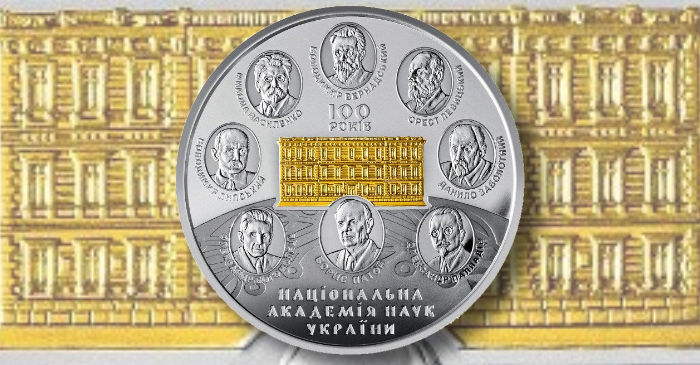 The Ukrainian Academy of Sciences was the oldest academy in the former Soviet Union formed after the establishment of the republic. In its first year, it had three research departments: History and philology, physics and mathematics, and social studies. At that time, the Academy incorporated three institutes, 15 commissions, and a national library. Its rich historical past and powerful scientific and technical potential gave it the opportunity to be one of the leading scientific centres of the world, preserving academic traditions in the organisation of scientific research.

The National Academy was even called upon during the turbulent years of the Great Patriotic War (1941-1945), when the Academy introduced scientific technology in the defence industry, implementing efficient technology of flux-welding of tank and artillery-system hulls and aerial-bomb bodies, improving the performances of combat material. A new page in the Academy’s history was opened with the studies of the Sun and near-Earth space with aerospace initiatives. Breakthroughs in space navigation and in-orbit biological experiments were achieved in decametres radio astronomy and extravehicular metal welding and cutting, which have won international recognition.

However, the utmost importance of the NAS has been their role in counteracting the impacts of the major human-induced disaster at the Chernobyl Nuclear Power Plant, which occurred in April 1986. It is well known today that the Academy had warned the highest authorities in the government against concentrating dozens of power units in Ukraine, but those warnings were sadly ignored. Since the very first days of the accident, the Academy’s researchers have aimed concerted efforts at abating grave impacts of the emergency and minimizing the losses, turning the ruined power unit and disaster zone into a pollution-free territory.

In 1994, three years after Ukraine declared their independence from the former Soviet Union, the Academy officially changed  its name to the National Academy of Sciences of Ukraine (NAS), and today carries out research in all fields of knowledge through three sections, 14 departments, nearly 170 correspondent institutes, and employs in excess of 19 thousand researchers.

The collector’s coins are produced at the mint facilities of the National Bank of Ukraine in Kiev and are jointly designed by Volodymyr Taran, Alexander Kharuk, and Sergey Haruk. 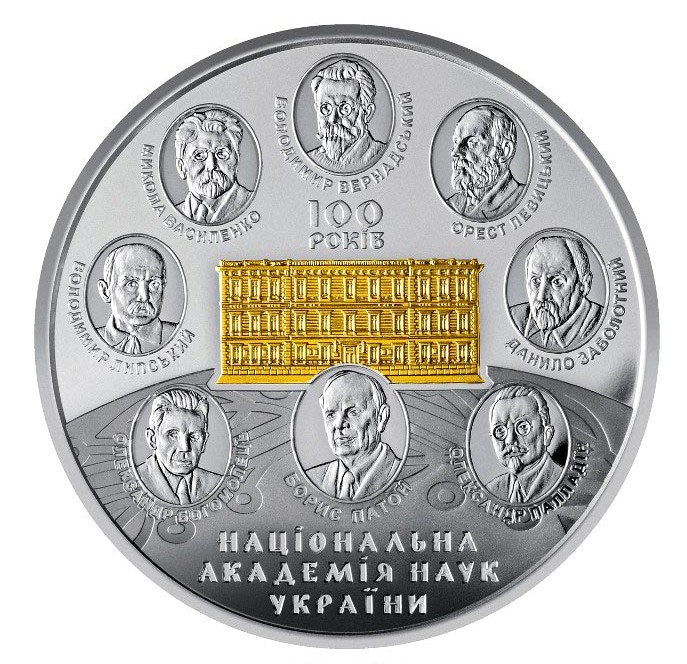 The reverse of the coin features the building of the Presidium of the National Academy of Sciences of Ukraine, which is displayed with spot gold plating. Above the building is the inscription 100 РОКІВ (100 years). The portraits of the presidents of the National Academy of Sciences of Ukraine with their signatures are placed in a circle; they are VLADIMIR VERNADSKY (top), OREST LEVITSKY (right), MIKOLA VASILENKO (left), VOLODYMYR LIPSKY (left), DANILO ZABOLOTNYY (right), ALEXANDER BOGOMOLETS (bottom left), ALEXANDER PALLADIN (lower right) and BORIS PATON (beneath in the centre), the current president. Against the patterned background is the inscription НАЦІОНАЛЬНА АКАДЕМІЯ НАУК УКРАЇНИ (National Academy Of Sciences Ukraine). 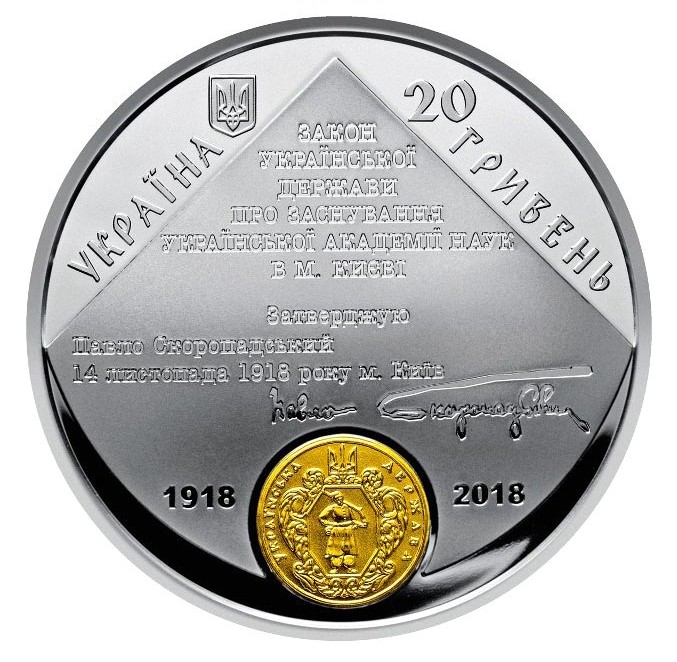 The obverse of the coin includes the small state emblem of Ukraine placed above left, under which the inscription of УКРАЇНА (Ukraine) is placed. In the top right is the coin’s face value of 20 ГРИВЕНЬ. In the centre against the matte background is the inscription ЗАКОН УКРАЇНСЬКОЇ ДЕРЖАВИ ПРО ЗАСНУВАННЯ УКРАЇНСЬКОЇ АКАДЕМІЇ НАУК В М. КИЄВІ ЗАТВЕРДЖУЮ ПАВЛО СКОРОПАДСЬКИЙ 14 ЛИСТОПАДА 1918 РОКУ М. КИЇВ (By law of the Ukrainian State is founded the Ukrainian Academy of Sciences Kiev approved Pavlo Scoropadskyi 14 November 1918, M. Kiev). Under the inscriptions is the facsimile signature of P. Skoropadsky. Below the primary design is a depiction of the seal of the Ukrainian state, which is highlighted with spot gold plating with the years of 1918 and 2018 seen on either side.

The Proof-quality coins are encapsulated and presented in a green National Bank-branded case, which is accompanied by a numbered certificate of authenticity. For additional information about this coin and others issued by the National Bank of Ukraine, please visit their website. Presently, the National Bank does not sell directly to collectors overseas.