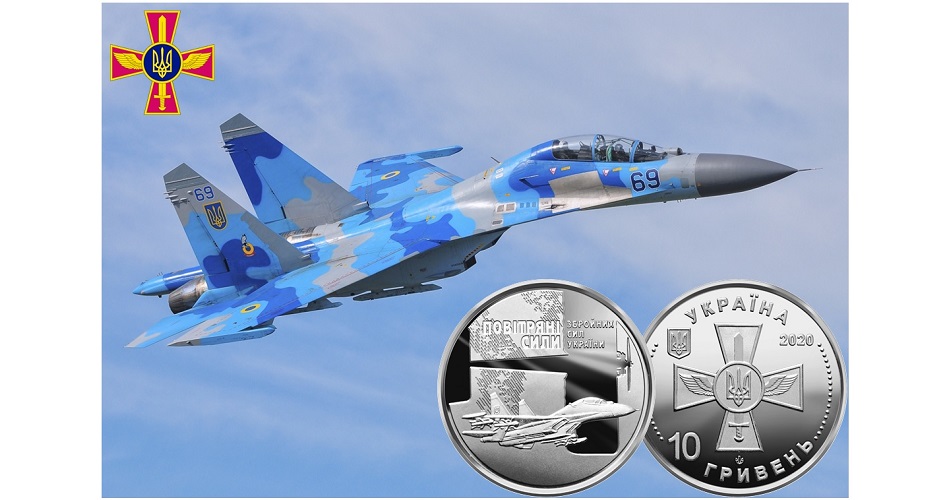 The National Bank of Ukraine has released (3rd August) new zinc-alloy collector coins focusing on Ukraine’s National Air Force. The new coins are issued as part of the ongoing series entitled “Armed Forces of Ukraine,” which focuses on the various branches and services of Ukraine and was first launched in 2015. One of the primary services in Ukraine’s military, the air force ensures the stability of its defence system, guaranteeing peace and security in cooperation with other defence forces and international partners. Headquartered in the city of Vinnytsia, the Ukrainian Air Force was re-established shortly after the Soviet Union was dissolved in 1991 as a result of many aircraft having been left on Ukrainian territory. In times of peace, the major mission of Ukraine’s air force is to protect national air space, which is carried out by flying air-space control missions over Ukraine’s entire territory of 603,700 square kilometres (233,100 square miles). Every day, some 400 items of weapons and equipment are summoned to perform defence duties, and, on average, Ukrainian radar forces detect and track more than 1,000 targets daily.

Ukraine’s Air Force was initially established more than a century earlier in 1917 when a military aviation force was created as an air fleet by Lieutenant Colonel Viktor Pavlenko (1886–1932), who was previously in the Russian service during World War I. Another Ukrainian, Petro Franko (1890–1941), created an aviation corps with the Ukrainian Galician Army in 1918 and organised an aviation school of the Ukrainian Galician Army Command Centre, which was active until 1920. Since reorganising, the Ukrainian air force has been downsizing in terms of numbers while at the same time updating and improving its forces and equipment. Despite the downsizing, the highly skilled, well-trained, and motivated fighter pilots enable Ukraine to possess the world’s 27th largest air force and the 7th largest air force in Europe. This is also largely due to the ability of its domestic defence industry Ukroboronprom and its Antonov subsidiary which maintains its older aircraft.

The country’s air defence systems are identified by four regions, Air Force Command, which is the primary station, Cdo West, Cdo East, and Cdo South, which also includes the disputed territory of Crimea annexed by Russian forces in 2014. Currently, 36,300 personnel and 80 out of 144 aircraft are in service in the Ukrainian air force and air defence forces. 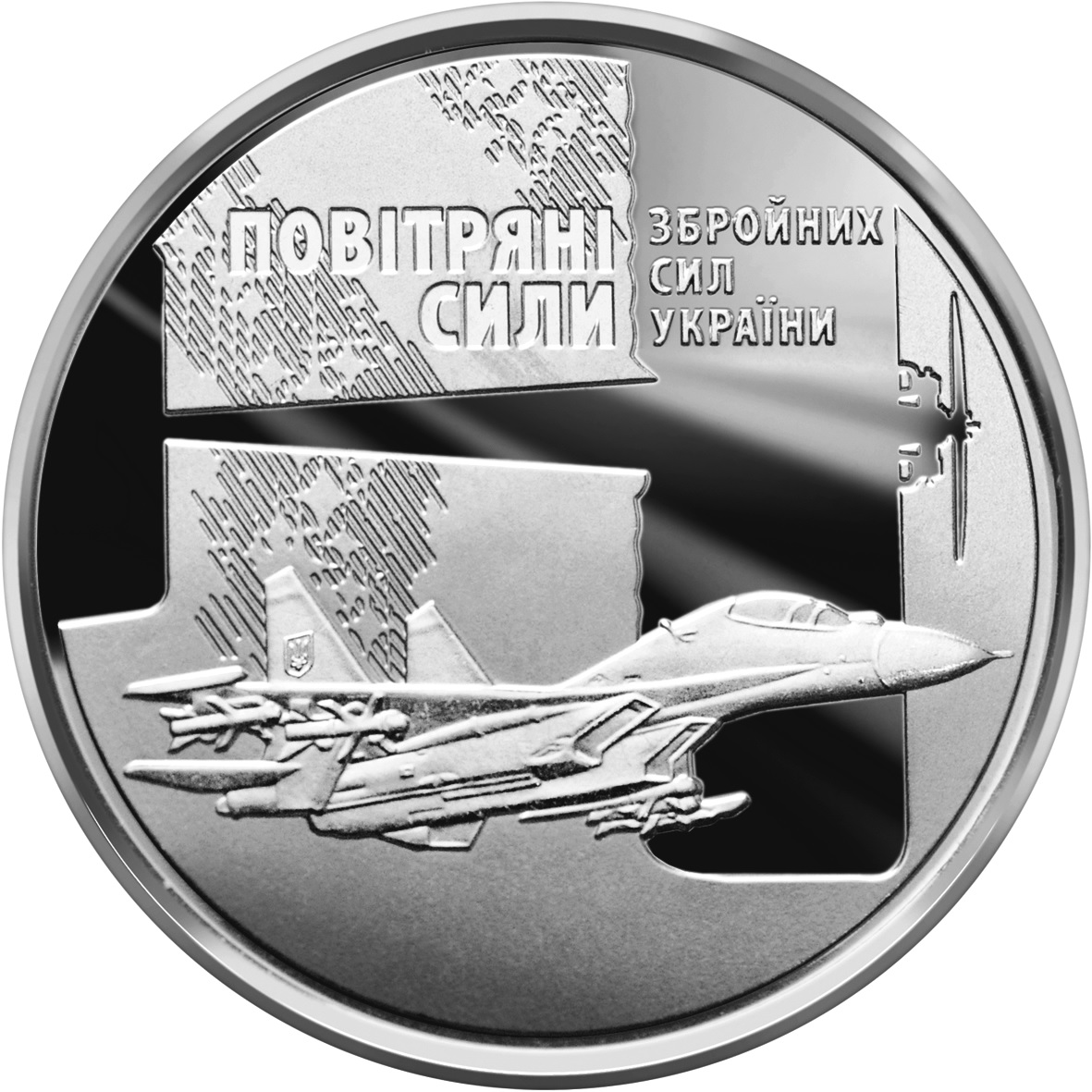 The zinc-alloy Brilliant Uncirculated quality coins are produced by the Ukrainian Mint at their facilities in Kiyv and are designed by Volodymyr Taran, Oleksandr Haruk, and Serhiy Haruk. The obverse side depicts the combat aircraft Sukhoi Su-27 which is in the service of the air force of the Armed Forces of Ukraine. In the background and shown as an incused outline is a vintage aircraft as seen from the ground looking up. The inscription reads ПОВІТРЯНІ СИЛИ (“Air Forces”) in incused lettering and ЗБРОЙНИХ СИЛ УКРАЇНИ (“Armed Forces Ukraine”) as raised lettering. 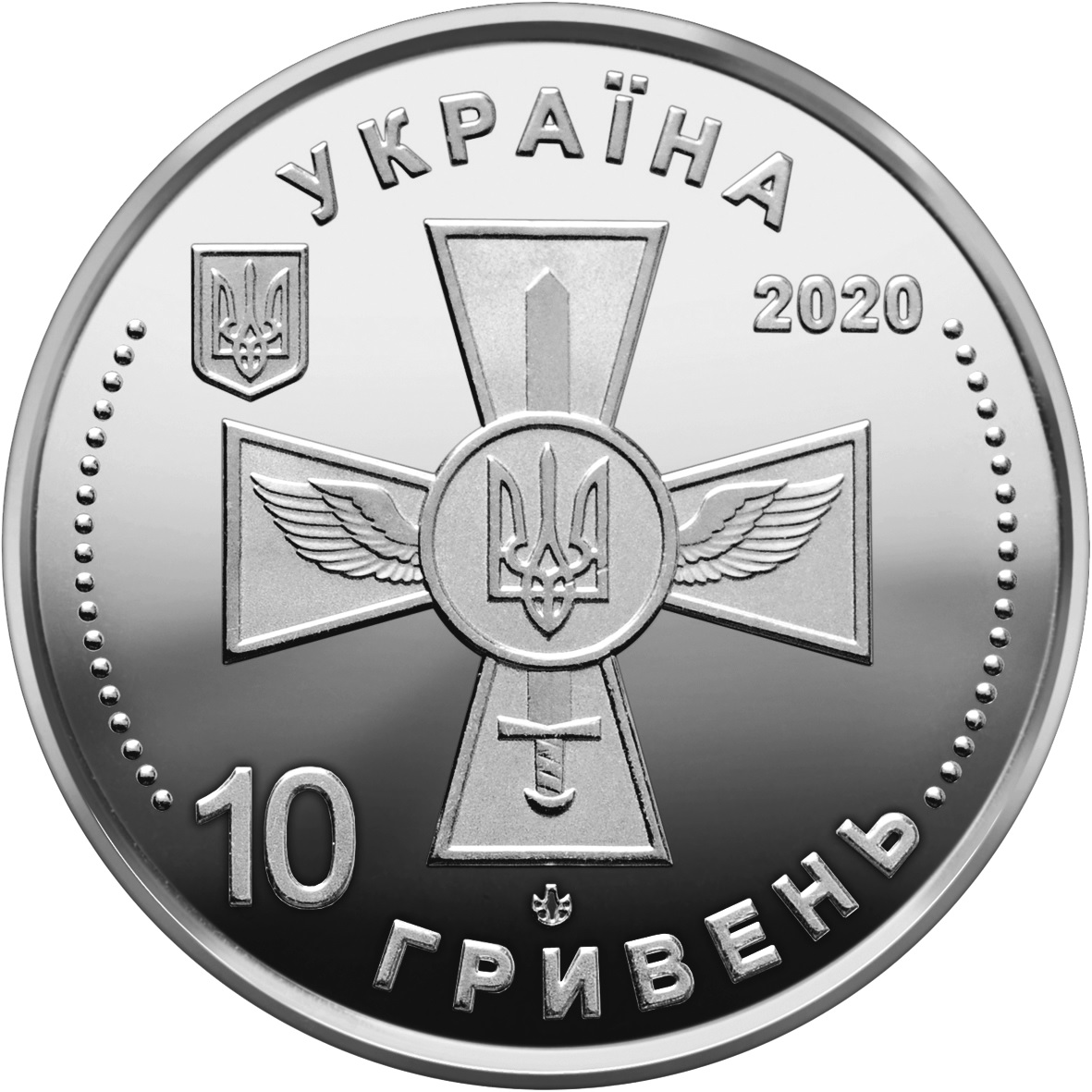 The reverse side includes the Ukrainian Air Force Cross insignia, which is centred. The text УКРАЇНА (“Ukraine”) is placed above the primary design while the denomination of 10 ГРИВЕНЬ is shown below. The year of issue, 2020, is positioned to the top-right of the cross, and the Ukrainian National Bank’s insignia is seen to the left.

Each coin is encapsulated and accompanied by a certificate of authenticity. For additional information about this coin and others issued by the National Bank of Ukraine, please visit their website.