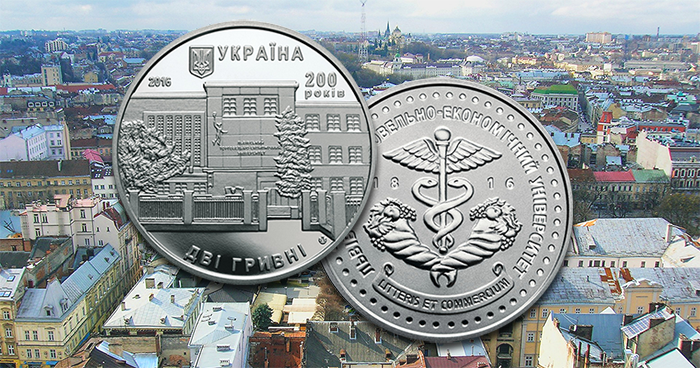 Ukraine’s 2 Grivnia commemorating the Lviv Trade and Economic University. In the background, the city of Lviv. (Pixabay photo)

On December 12, the National Bank of Ukraine released a new commemorative coin that salutes higher education and institutions in the country—most specifically, the occasion of the 200-year anniversary of the Lviv Trade and Economic University, which is one of the oldest educational institutions in Ukraine. It is considered one of the best sources of preparation for trade and business professionals entering the workplace, as well as being the successor to the exemplary traditions of the Lviv Commercial Academy. Its origins as an institution of higher education for training specialists in business go back to specialized schools that operated in Ukraine in the first half of the 19th century. The date of the founding of the institution is considered to be March 7, 1816—the date of the founding of the original Lviv Commercial Academy. The academy was elevated to the status of a university by a directive from the Religion and Education Ministry of Austria-Hungary on September 8, 1899, and was given the status as a State Trade School. Today, the Lviv University of Trade and Economics is a modern educational and scientific institution in the European model. 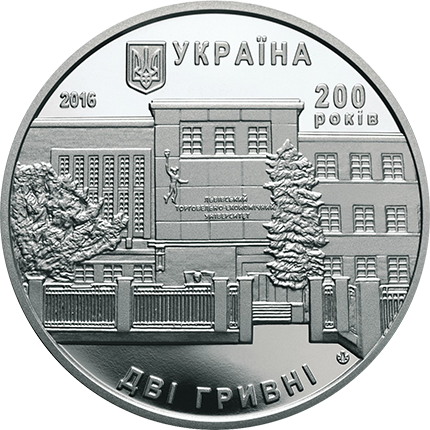 The coin is produced by the Mint of Ukraine on behalf of the National Bank and is designed by Ukrainian painter and sculptor Vladimir Atamanchuk. The obverse includes the state emblem of Ukraine positioned at the top along with the inscription УКРАЇНА (“Ukraine”). In the center, on a mirrored background, is the main building of the Lviv Trade and Economic University. Below and to the left of the state emblem is the year of issue, 2016; below and to the right, in two lines, is the inscription 200 РОКІВ (“200 Years”). Below the building in a semicircle is the face value, ДВІ ГРИВНІ (“Two Grivnia”). Also included is the logo of the Mint of Ukraine. 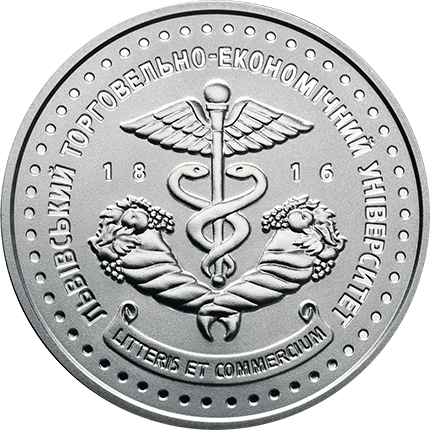 The reverse design includes the coat of arms of the university with the year 1816, separated as two numerals on either side of the insignia. At the base of the insignia or crest is the Latin motto LITTERIS ET COMMERCIUM (“Letters and Trade”), and above the principal design is the text ЛЬВІВСЬКИЙ ТОРГОВЕЛЬНО-ЕКОНОМІЧНИЙ УНІВЕРСИТЕТ (“Lvіvsky Torgovelno Economic University”).

For more information on these and other coins offered by the National Bank of Ukraine, please visit their website. A list of local sales and retail points can be found here. No information is currently available for international direct sales.   ❑