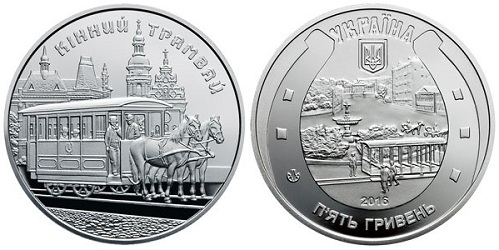 The National Bank of Ukraine has issued (May 25) a new coin remembering the construction of Ukraine’s first horse-drawn tram system, which was inaugurated in the second half of the 19th century. This new coin marks the 125th anniversary of its launch.

The need to provide public transportation for the city of Kiev and its inhabitants was apparent to the local government at the time, and by 1886 various projects for the construction of a horse-drawn tramway were planned and submitted. However, due to an array of obstacles including a lack of funding, none of these plans ever proceeded past the construction stage. However, later that year, engineer Amand Struve (1835 – 1898), presented a project to the city council that was approved for construction and implementation. On July 30, 1891, the first horse-drawn tram wagon was inaugurated and set on track. By August 1, the tram line was fully operational and stretched from the Tsar’s Square — re-named European Square, located in today’s old town district — to the Demiivska Square.

Nowadays, present-day Kiev employs a modern tram system run by electricity with rolling stock manufactured in both Riga and Prague. With nearly two dozen routes, the tram system accesses much of the city at an affordable cost to commuters; much of the original tram lines operated by horse-drawn power are still in use today. 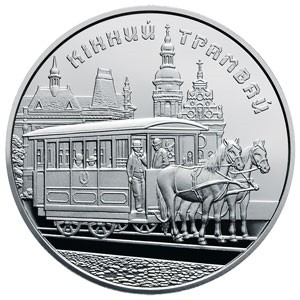 The coin is produced by the Mint of Ukraine on behalf of the National Bank and designed by artists Vladimir Taran, Alexander and Sergey Kharuk (obverse), and Vladimir Demyanenko (reverse). The obverse design depicts the city’s panoramic skyline from the 19th century along with a detailed image of a horse-drawn carriage in the center. The text КІННИЙ ТРАМВАЙ (“Horse tram”) is placed just above the primary design. 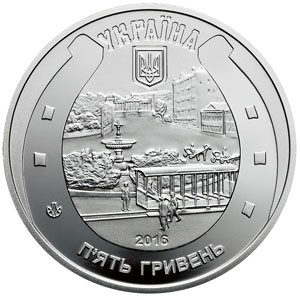 The reverse design appropriately includes a horse shoe; in the center of the shoe is a depiction of European Square together with the image of a 21st century tram. The year of issue, 2016, and denomination are placed below the design, with the country’s national emblem located just above.

For additional information on these and other coins issued by the National Bank of Ukraine, please visit their Web site. A list of local sales and retail points can be found here. No information is currently available for international direct sales.