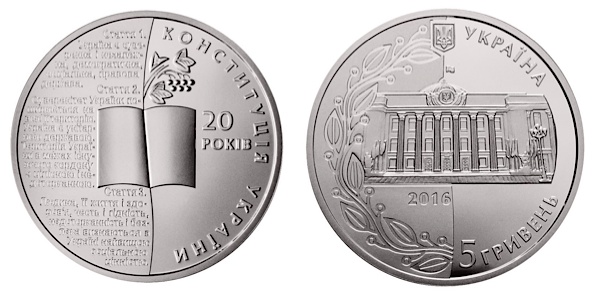 The National Bank of Ukraine has issued (June 20) two new coins marking the 20th anniversary of the country’s post-soviet constitution, which was initiated after it attained independence in 1991. The constitution is referred to as the “Basic Law of Ukraine” and was voted into law by Parliament on June 28, 1996. The document outlines how the nation will function under basic law, defining the relationship between state and society. It is considered to have contributed greatly to the revival of Ukrainian statehood, which had previously been achieved briefly after the abdication of Russian Czar Nicholas II in 1917, but was quelled after the rise of the Bolsheviks and the Soviet Union.

On August 24, 1991, the parliament of the former Ukrainian Soviet Socialist Republic adopted the Act of Independence bill formally declaring the sovereignty of Ukraine from the Soviet Union, which would be signed out of existence by its chairman Mikhail Gorbachev on December 31, 1991. This move paved the way for the adoption of a democratic Republic and for new presidential elections.

The right to amend the constitution through a special legislative procedure is vested exclusively with the parliament, and all laws and other legal acts pertaining to the Republic of Ukraine must conform to the constitution. The only body that may interpret the constitution and determine whether legislation conforms to it is the Constitutional Court of Ukraine. Since 1996, the public holiday known as Constitution Day is celebrated on June 28. Another significant development at this time was the adoption of the country’s currency, the Hryvnia, which became legal tender on September 2 that same year. 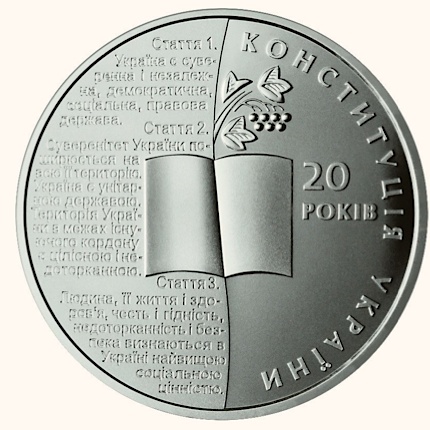 The coins are produced by the Ukrainian Mint and were designed with a collaborative effort by Vladimir Taran, Alexander Kharuk, and Sergey Kharuk. The obverse design is shared by both denominations and depicts in detail text from the first three articles of the country’s constitution, which reads:

“Article 2. The sovereignty of Ukraine extends throughout its territory. Ukraine is a unitary state. The territory of Ukraine within its present border is indivisible and inviolable.

“Article 3. Man, his life and health, honor and dignity, inviolability and security are recognized in Ukraine as the highest social value.”

The text is partially superimposed with the depiction of an open book, symbolizing the bound document itself, with a sprig of holly above the book. The wording КОНСТИТУЦІЯ УКРАЇНИ (“Ukrainian Constitution”) is positioned around the rim toward the right side, and 20 РОКІВ (“20 Years”) is placed just to the right of the open book. 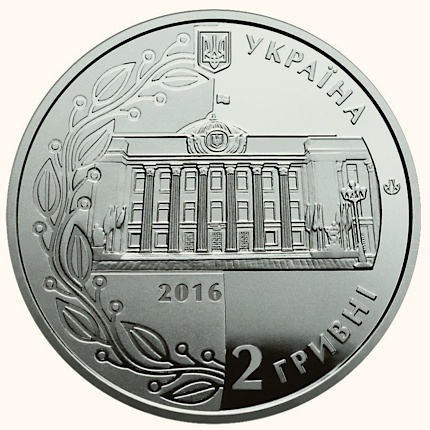 The reverse includes a depiction of the building of the Verkhovna Rada, or parliament of Ukraine, surrounded by a border of holly to the left side, and the text УКРАЇНА with the coin’s denomination to the right.

For additional information on these and other coins issued by the National Bank of Ukraine, please visit their Web site. A list of local sales and retail points can be found here. No information is currently available for international direct sales.