Helen Beatrix Potter (1866 – 1943) was born in the affluent London borough of Kensington into a family of privilege. As a way to earn extra money in the 1890s, Beatrix and her younger brother Walter would print cards of their own design for Christmas and other special occasions. Mice and rabbits were the most frequent subject of her fantasy paintings as a young girl, and these served as the inspirations for her later works and characters.

Beatrix was educated by governesses throughout her early life, the last of whom, Annie Moore, was just three years older than Beatrix. Moore tutored Beatrix in German and was also in her family’s service in the capacity of lady’s companion. She and Beatrix remained lifelong friends and Annie’s eight children were the recipients of many of Potter’s delightful illustrated letters. It was Annie who later suggested that these letters and characters might make good children’s books.

Potter has delighted generations of children worldwide with such unforgettable characters as Peter Rabbit, Jemima Puddle-duck, Flops, Mopsy, and Cottontail, to name but a few. The first stories debuted in 1902 with the publication of “The Tale of Peter Rabbit.” Peter’s exploits with his friends and family were included in five more stories appearing from 1904 to 1912.

Peter cuts a dapper figure in jacket and shoes and lives with his mother, Mrs. Rabbit, and his three sisters in a rabbit hole with a kitchen, furniture, and a shop where Mrs. Rabbit sells various items. Peter’s cousin, Benjamin Bunny, and Benjamin’s father, Mr. Benjamin Bunny, also appear.

These stories were immensely successful, leading to one of the first-ever instances of additional merchandising when a stuffed Peter Rabbit doll and a board game were patented in 1903. In all, Beatrix Potter authored and/or illustrated thirty books; these generated a great deal of financial means which Potter utilized to buy various farms and country estates, intending to preserve and retain their original functions. For this activity, Potter is also remembered as an avid conservationist.

Potter also became a lifelong friend of Canon Hardwicke Rawnsley, who was the first secretary and founding member of the National Trust for Places of Historic Interest or Natural Beauty in the United Kingdom. Beatrix Potter died on December 22, 1943 at her country home at Castle Cottage. She bequeathed nearly all her property to the National Trust, including over 4,000 acres of unspoilt land, 16 farms, cottages, and herds of cattle and Herdwick sheep. Her gift to the nation was the largest gift to the National Trust ever at the time and enabled the preservation of the land now included in the UK’s Lake District National Park.

The seven-sided coin, designed by Royal Mint artist and engraver Emma Noble includes an inscription echoing the font we are so familiar with from Potter’s tales. Noble has included elements celebrating Beatrix as the artist and illustrator behind some of the best-loved characters in children’s literature. A silhouette of the author’s profile is placed above the primary design which includes the inimitable Peter Rabbit as the central element. The obverse side includes the fifth official effigy of HM Queen Elizabeth II, designed by Royal Mint artist and engraver Jody Clark and used on all UK circulation coinage since 2015. 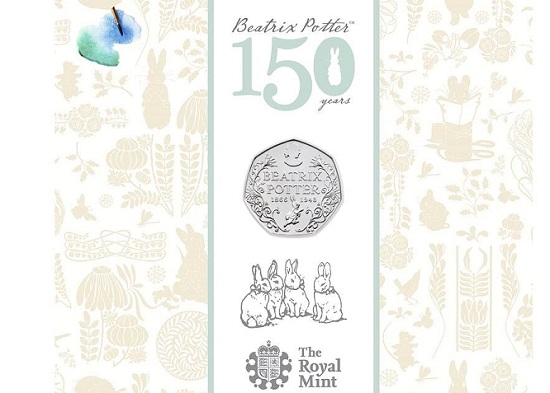 This commemorative coin has been endorsed by Frederick Warne & Co., a Penguin Random House company, and former holders of the copyright to Potter’s stories. The coin is available in gold Proof, silver Proof Piedfort, and silver Proof, as well as a base metal BU edition. All three precious metal versions are accompanied by a booklet on Potter’s life, her talents, and her legacy, with a certificate confirming the limited edition mintage. Unlimited Brilliant Uncirculated variants of the coin are presented in a fold-out wallet, decorated in the style of Beatrix’s illustrations, and telling the story of her life.

A 2006 film starring Renée Zellweger depicted Potter’s early career and her romance with editor Norman Warne. Additionally, an animated/live-action adaptation featuring Peter Rabbit is scheduled to be released by Sony Pictures Animation in March of 2018. For more information on this and other coins available from the Royal Mint, please visit their Web site. International orders dispatched where applicable.