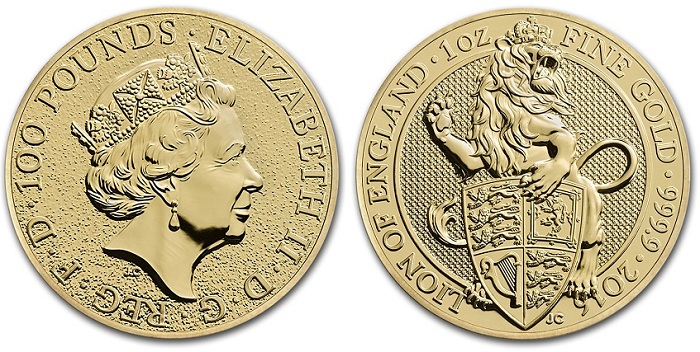 The Royal Mint has officially launched (29th March) three new coins featuring both mythical and real beasts that have featured on British heraldry over the last five centuries. Spanning back to the reign of King Henry VIII, The King’s Beasts are a group of creatures that symbolize the various strands of royal ancestry brought together as a heraldic badge.

The Lion of England is the first of the creatures to be introduced for this new bullion coin series. Royal Arms are the arms of the monarch, an ancient device that represents their sovereignty. The crowned golden Lion of England has been one of the supporters of the Royal Arms since King James I came to the throne in 1603, but the symbol of a lion has stood for England far longer. Richard the Lionheart, son of King Henry II, established three golden lions as the Royal Arms of England, and lions have appeared on the coat of arms of every British sovereign since the twelfth century. 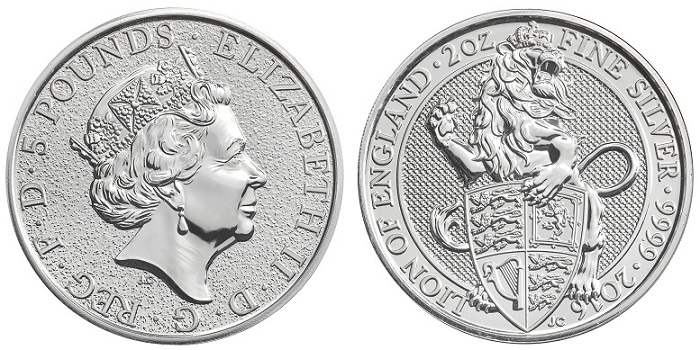 The new series, entitled “the Queen’s Beasts” will include ten of these creatures, which recall hundreds of years of British royal heraldry. The series will introduce one ‘beast’ at a time, starting with the gallant Lion of England designed by British coin designer Jody Clark.

Inspiration for the design of this series has been taken from the actual Queen’s Beasts sculptures, each standing at around two meters tall; they were created by James Woodford for the coronation ceremony of Queen Elizabeth II held in Westminster Abbey in 1953.

The reverse design includes the present representation of Queen Elizabeth II and the United Kingdom. Two beasts are shown supporting a quartered shield, the Scottish Unicorn, and the English Lion. The text LION OF ENGLAND along with the weight, metal, and year of issue also make up the reverse design. The obverse bears the fifth portrait of Her Majesty the Queen, also designed by Jody Clark and introduced on British coinage in March of 2015.

The introduction of the “Queen’s Beasts” brings an exciting new series of bullion coins to investors around the globe. The current range consists of 1 oz. and 1/4 oz. gold coins, as well as the Royal Mint’s first two-ounce 999.9 pure silver bullion coin.