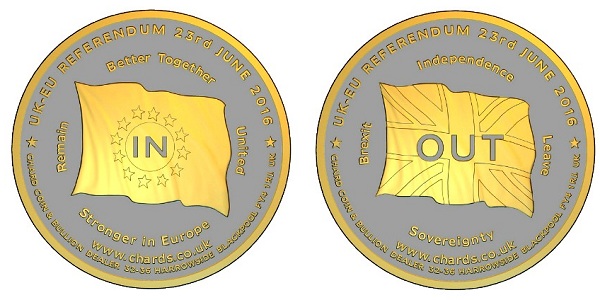 Numismatic and Bullion dealer Chards Ltd. of Blackpool, England has devised a new method for those still deciding how to vote in an upcoming referendum that will determine whether the United Kingdom remains in the European Union. If in doubt, flip a coin: that’s what the company behind a new medallion are hoping the nearly 15% of undecided voters will do if they can’t reach a decision by the day of the referendum. Chards has designed a medallion highlighting both sides of the argument, with one side focusing on the “pros” of remaining in the European Union, while the other side highlights reasons to leave the EU.

The referendum, now billed as a “once in a generation decision,” came to the forefront of British politics when the current government won a resounding mandate in 2015. As part of their campaign, they promised to present a referendum to decide whether the country would remain part of the 28-member trading bloc, or leave after a 43-year-tenure that began as part of the European Economic Community (EEC), and then the European Union after 1992.

The United Kingdom became the tenth member to join the EEC on January 1, 1973, along with Denmark and Ireland. The EEC evolved into a larger trading entity with greater political reach by 1992, and included a single currency; the majority of its members have joined the euro-zone since 2002. The United Kingdom, Denmark, and Sweden each negotiated an “opt-out” of the single currency, with the United Kingdom arguing it would not be in the best interest of its economy and overall well-being to abandon the pound, which was and is regarded as an international reserve currency.

Other circumstances have lessened the popularity of the European Union with the British public, from common agricultural policies and the opening up of borders, to the greater participation of the European parliament and court in the affairs of nation-states, leading to accusations of infringement of national sovereignty. With recent incidents such as the migrant crisis and financial meltdowns of Greece, Ireland, Spain, and Portugal, the British people have increasingly questioned their place within the E.U. and have nurtured “euro-skeptic” political movements that have petitioned the public to force the new government to hold a referendum to decide the question.

It was expected the vote might be held in 2017, but the government of Prime Minister Cameron moved the date ahead to June 23, 2016 after a series of negotiations with Brussels and Westminster managed to hammer out some concessions. He has reiterated the UK’s commitment to remain out of the euro-zone and worked to lessen penalties against the British economy for not using the euro currency. He has also negotiated the strengthening the country’s borders and for the return of EU nationals to their countries if they cannot find employment after six months.

Prime Minister Cameron has also negotiated a guarantee that the UK is not subject to further integration with the EU, either economically or politically, if it is not thought to be in the country’s best interest. This series of negotiations was undertaken after his win in the last general election, aiming to decrease the uncertainty surrounding the UK’s membership in the EU, over which big business has also raised concerns. 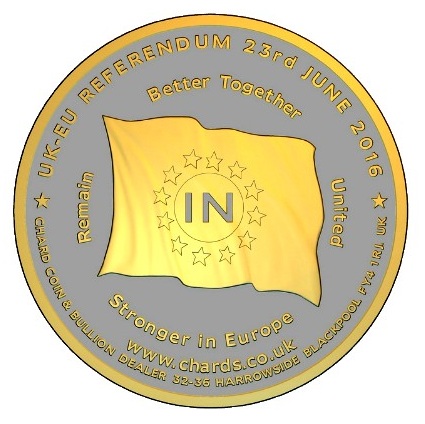 The medallion designs detail an “In” side, which includes the flag of the EU with the word IN in the middle, along with words REMAIN, BETTER TOGETHER, UNITED, and STRONGER IN EUROPE encircling the flag. Above the flag is the text UK – EU REFERENDUM 23rd JUNE 2016. 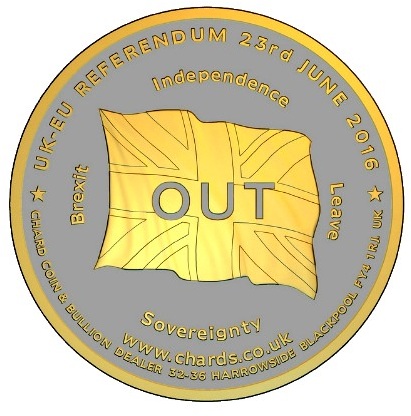 The other side includes the Union Jack flag with the word OUT over the flag. Around the flag are the key words BREXIT, INDEPENDENCE, LEAVE, and SOVEREIGNTY placed around the flag. Above the flag is the text UK – EU REFERENDUM 23rd JUNE 2016.

The referendum is to be held on June 23. Although the government will not be legally bound to act on its outcome, it is doubtful that the Prime Minister, who is campaigning to remain in the EU, will ignore the result if the public overwhelmingly votes to leave the EU. In fact, it means he will either resign his position in defeat or begin in earnest negotiations for the UK to “divorce” itself from the European Union; experts predict it could take as long as two years to sort out the intricacies of a split. For more information on the “Brexit” medallion, please visit the Web site of Chards Ltd.