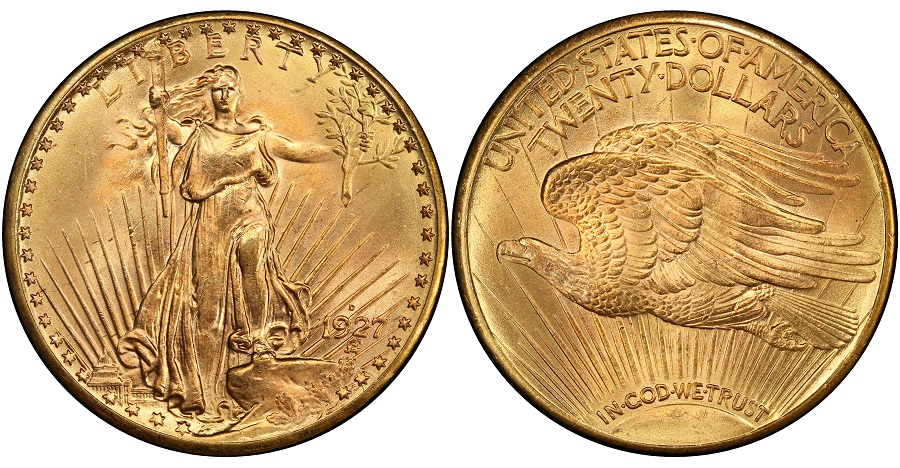 With a winning bid of $2,160,000, this 1927-D Saint-Gaudens double eagle was the most valuable U.S. rare coin sold at auction during the first half of 2020. (Image courtesy of Professional Coin Grading Service). Hover to zoom.

(Temecula, CA) July 6, 2020 — The market for high-quality, rare United States coins remained active during the first six months of 2020 despite pandemic-related closures of many retail locations and cancelation of dozens of coin shows and numismatic conventions around the country, according to the Professional Numismatists Guild (PNG). The PNG is a nonprofit organization composed of many of the country’s top rare coin and paper money experts.

“Even with economic uncertainty and the lack of face-to-face transactions and in-person floor bidding, major auction firms reported selling more than $167 million of U.S. rare coins in online public auctions during the first half of the year. Dozens of record prices were established for coins selling for five, six and even seven figures,” said PNG President Richard Weaver.

One of the many examples of superb quality rare coins commanding record prices was the $101,251 winning bid for the finest known 1905 Barber design silver quarter-dollar graded PCGS MS-68 CAC offered by GreatCollections Coin Auctions. It sold for four times its price guide value.

In addition to the reported auction results, PNG conservatively estimates that least another $150 million of U.S. coins were sold by these auction firms in private transactions in the first half of the year.

“Sales of precious metal bullion coins, such as gold and silver American Eagles, also have been active and premiums over their intrinsic value have risen as supplies dwindled due to pandemic-related interruptions of coin production at the United States Mint,” said Weaver.

“As always, to avoid counterfeits we recommend that buyers of rare coins or bullion coins should only purchase from reputable, knowledgeable dealers, such as members of the Professional Numismatists Guild and its Accredited Precious Metals Dealer program (APMD),” he emphasized.

Professional Numismatists Guild members must adhere to a strict code of ethics in the buying and selling of numismatic merchandise. For additional information, click here or contact the PNG by phone at 951-587-8300 or email at .