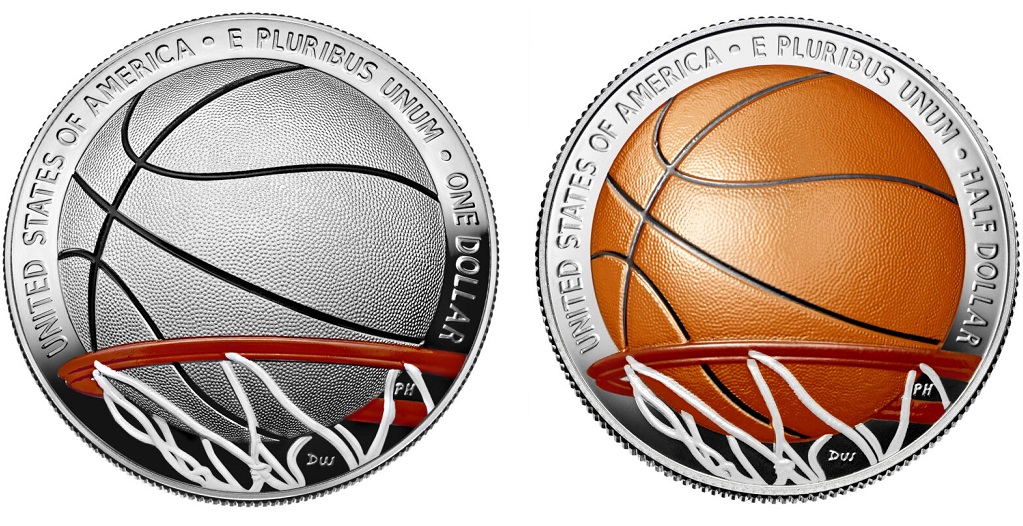 The following is an excerpt from an article by Stephanie Meredith on the website of the United States Mint:

In August 2020, the U.S. Mint releases its first colorized coins as part of the Basketball Hall of Fame Commemorative Coin Program. The program recognizes the 60th anniversary of the Naismith Memorial Basketball Hall of Fame with curved coins in gold, silver, and clad. A limited number of silver Proof and clad Uncirculated coins are colorized on the reverse side. The silver coin features a colored net, rim, and channels on the basketball. The clad coin colorizes the entire basketball as well as the net and rim.

Colorizing coins appeared in the early 1990s by nations such as Uganda, Equatorial Guinea, and Palau. Now many countries around the world make colorized coins. Canada and Australia are large producers of these coins and develop many innovative techniques for applying color. The Royal Canadian Mint was the first to produce a colorized circulating coin, the 25-cent coin, in 2004.

Coins are colorized by methods such as applying a “sticker” to the surface, adding ink or paint through a computerized “printing” process, or enameling by filling recessed areas with paint. The U.S. Mint used a third-party to colorize the Basketball commemorative coins using an automated process.

Watch the video to learn more about the Basketball Hall of Fame commemorative coins: