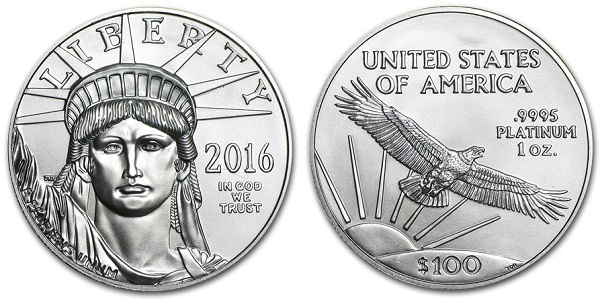 The U.S. Mint has announced that it will begin selling 2016 American Eagle One-Ounce Platinum bullion coins to its authorized purchasers on Monday, July 25. The coins will be subject to allocation and will be sold until the available inventory has been depleted. This will be the first time the Mint has offered platinum bullion coins since 2014.

Platinum is currently valued at roughly $1,100 per ounce. The Mint’s press release from today reminds prospective buyers that their bullion coins are sold at a cost close to the spot price of the metal, with a small premium added to cover production and distribution expenses.

The Platinum Eagle bullion coin’s obverse, designed and sculpted by John Mercanti, features a depiction of the Statue of Liberty with LIBERTY, 2016, E PLURIBUS UNUM, and IN GOD WE TRUST inscribed near the rim and in the field. The reverse was designed and sculpted by Thomas D. Rogers and features an eagle mid-flight, with the sun shining in the background. Inscribed on this side of the coin are UNITED STATES OF AMERICA, .9995 PLATINUM, 1 OZ., and the monetary denomination of $100.

One-Ounce Platinum Eagles were first sold by the Mint in 1997 and were offered as both bullion and Proof versions each year until 2008. Since then, the Mint has continued to offer the Proof coin every year, but the bullion option was shelved until 2014, then skipped again in 2015. Between the years of 1997 and 2008 the Mint also offered fractional sizes of platinum bullion and Proof coins; collectors and investors could choose from 1/10-ounce, 1/4-ounce, and 1/2-ounce Platinum Eagles in addition to the one-ounce version. The Mint has not announced plans to offer the smaller pieces in 2016.

A mintage limit has not been established for 2016’s Platinum Eagle bullion issues, but a look at recent sales totals gives us a sense of what to expect. The coins were last offered in 2007, 2008, and 2014, and they logged final mintages of 7,202, 21,800, and 16,900 units, respectively, according to Mega Red: A Guide Book of United States Coins, Deluxe Edition.

The Proof version of the 2016 Platinum Eagle was released on June 30 and sold its 10,000-piece mintage in under an hour. The Mint’s current total for item after adjustments stands at 9,618 units sold. For more information on platinum coins issued by the U.S. Mint, please visit the Mint’s Web site.