The U.S. Mint has provided images and information relating to the 2016 American $1 Coin and Currency Set, due for release this week, on Thursday, June 16. As with last year’s issue, the new set will be available for $14.95 and include both an Enhanced Uncirculated Native American dollar and a $1 United States bank note. This year’s bank note will be dated 2013 and derive from one of the country’s 12 Federal Reserve Bank locations.

The mintage limit for the new Coin and Currency Set has been set at 75,000 units. This is 15,000 less than the 90,000-set allocation awarded to last year’s issue, which was increased in response to the unexpected popularity of the 2014 set. The 2015 issue has yet to be declared “sold out” however, and this year’s limit seems like a better approximation of collector interest in the issue. Orders will be limited to five per household. 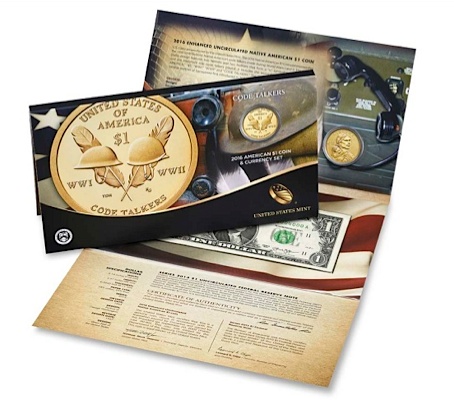 The coin and bank note are exclusive to this set and come housed in a folder bearing historical information on Code Talkers and a certificate of authenticity. Recent figures put the 2014 set at 50,000 units sold, while the 2015 set is listed at 88,363 on the most recent U.S. Mint sales report. 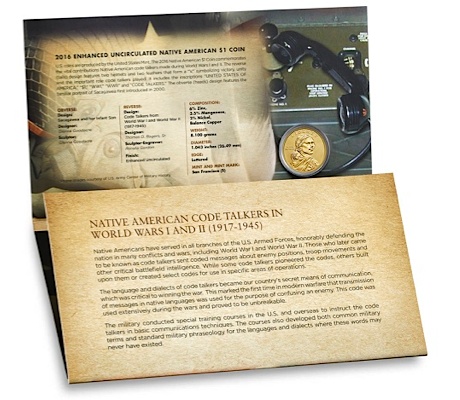 The obverse of the Native American dollar was designed by Glenda Goodacre and is common to coins in this series; it first appeared on the Sacagawea dollar in 2000. It features a rendering of Sacagawea with a sleeping child, with the inscriptions LIBERTY and IN GOD WE TRUST located in the field. 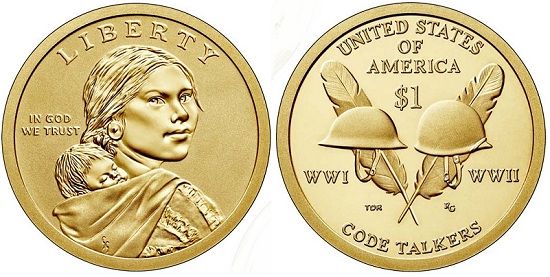 The 2016 reverse includes soldiers’ helmets from World Wars I & II placed over feathers positioned to form a “V” for victory. Inscribed in the field is UNITED STATES OF AMERICA, $1, WWI, WWII, and CODE TALKERS. This side of the coin was designed by Thomas D. Rogers, Sr. The date, mint mark, and E PLURIBUS UNUM are included along the edge of the coin.

“Code Talkers” were Native Americans who used tribal languages to transmit secret communications for the U.S. military from 1917 to 1945. Navajo Code Talkers received a Congressional Gold Medal in 2001, and the Code Talkers Recognition Act of 2008 established a plan to recognize 33 other tribes who served in this capacity as well.

For more information on the 2016 American $1 Coin and Currency Set, please visit the Web site of the U.S. Mint.