The U.S. Mint has shared information on the upcoming launch event for the Cumberland Gap National Historical Park Quarter, scheduled for Monday, April 11 at 11 a.m. ET. The ceremony is open to the public and will take place at Cumberland Gap National Historical Park Visitor Center on Pinnacle View Road in Middlesboro, Kentucky. Two local fourth-graders will host the ceremony and 2,200 (!) children aged 5-13 will be sworn in as junior rangers.

Representatives of the park, local government, and the U.S. Mint will also be in attendance. The event will include a coin exchange in which members of the public can trade cash for rolls of the new quarters. There is a one-roll ($10) minimum and 10-roll ($100) maximum in place for the coin exchange.

On the evening prior to the launch (Sunday, April 10), the Mint will host a Coin Forum at the C.V. Whitney Convention Center in Pine Mountain State Resort Park, located at 1050 State Park Road in Pineville, Kentucky. It will take place from 3 to 4 p.m. and give members of the public a chance to learn more about the U.S. Mint’s upcoming initiatives, and weigh in on their ideas for future coinage. 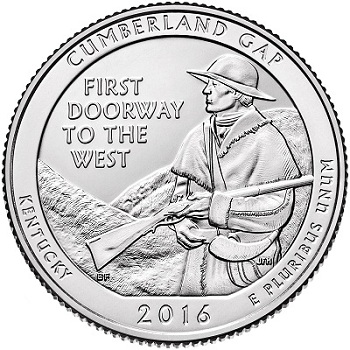 The Mint’s press release can be viewed below, along with a brief video detailing production of the new quarter.

The event starts at 11 a.m. at the park’s visitor center on Pinnacle Road in Middlesboro, Ky. Event highlights include an en masse swearing in of more than 2,200 junior rangers.  The free event will conclude with a coin exchange, where the public can trade cash for $10 rolls of newly minted Cumberland Gap National Historical Park quarters.

Coin Forum
The United States Mint will host a coin forum the afternoon before the launch ceremony–3 to 4 p.m. ET Sunday, April 10–at the C.V. Whitney Convention Center in Pine Mountain State Resort Park at 1050 State Park Road in Pineville, Ky.  The coin forum is an opportunity for members of the public to express their views about future coinage, and learn about upcoming United States Mint coin programs and initiatives.

The Cumberland Gap National Historical Park quarter is the 32nd release in the United States Mint America the Beautiful Quarters Program, a 12-year initiative to honor 56 national parks and other national sites authorized by Public Law 110-456.  Each year, the public will see five new national sites depicted on the reverses (tails sides) of the America the Beautiful Quarters.  The United States Mint is issuing these quarters in the order in which the national sites were officially established.