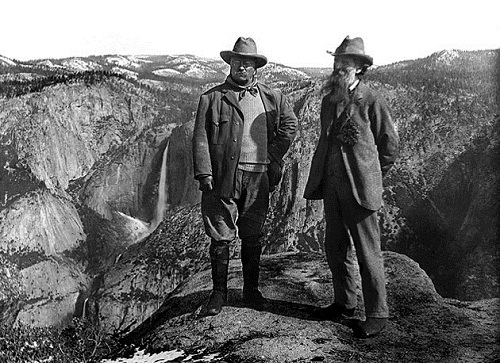 Today the U.S. Mint revealed designs for three coins that will be issued to commemorate the 100th anniversary of the United States National Park Service in 2016. The issues will include a gold five-dollar coin, a silver dollar, and a clad half dollar; pricing and release dates for these coins have yet to be determined.

The National Park Service was established in 1916 by President Woodrow Wilson. The new commemorative issues celebrate the contributions the N.P.S. has made to American life, and will utilize the addition of a surcharge to contribute to the preservation and promotion of resources under the management of the Park Service.

Jonathan B. Jarvis, Director of the N.P.S., said of the initiative, “Heads or tails, this Centennial commemorative coin helps to honor the National Park Service’s first century of service to protect, preserve, and share some of our nation’s greatest natural resources, culture, and history. The coins will be a fun centennial collectible, and the proceeds will contribute to our second century of service to the American people.” 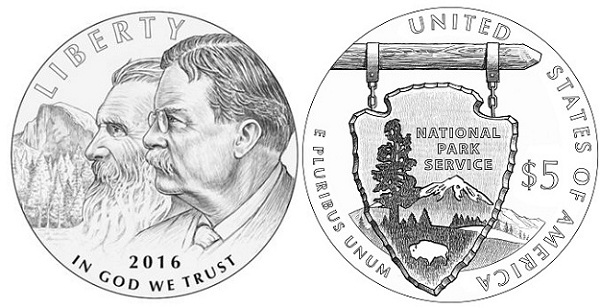 The obverse of the five-dollar gold coin features profile portraits of John Muir and Theodore Roosevelt, with Yosemite National Park’s Half Dome pictured in the background. Inscribed along the rim of the coin are LIBERTY, 2016, and IN GOD WE TRUST.

Its reverse features the N.P.S. logo and the inscriptions UNITED STATES OF AMERICA, E PLURIBUS UNUM, and the coin’s $5 denomination. Don Everhart designed and sculpted both the obverse and reverse of the coin. 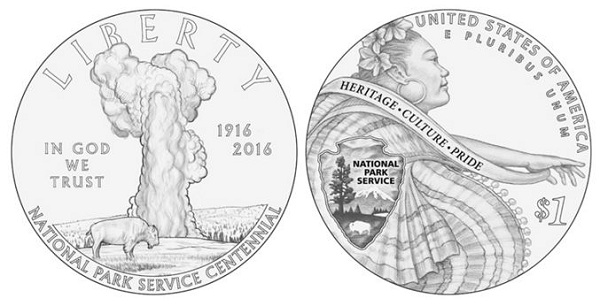 The silver dollar’s obverse design, created and sculpted by Joseph Menna, features a depiction of Yellowstone National Park’s Old Faithful geyser behind a solitary bison. The inscriptions LIBERTY, NATIONAL PARK SERVICE CENTENNIAL, IN GOD WE TRUST, and 1916-2016 are placed around the image.

The reverse image includes the N.P.S. logo before a Latina Folklórico dancer. Inscriptions are UNITED STATES OF AMERICA, E PLURIBUS UNUM, $1, HERITAGE, CULTURE, and PRIDE. The reverse was designed by Chris Costello and sculpted by Jim Licaretz. 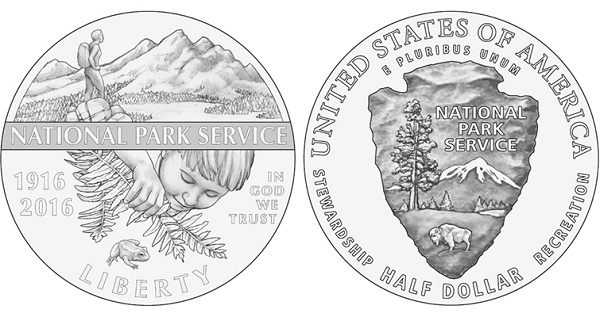 The clad half dollar obverse features a hiker exploring the wilderness and a child peeking through ferns at a small frog. Inscriptions are LIBERTY, 2016, IN GOD WE TRUST, 1916, and NATIONAL PARK SERVICE. The obverse was designed by Barbara Fox and will be sculpted by Michael Gaudioso.

The coin’s reverse features the N.P.S. logo, with UNITED STATES OF AMERICA, E PLURIBUS UNUM, HALF DOLLAR, STEWARDSHIP, and RECREATION inscribed around the design. The reverse was designed by Thomas Hipschen and sculpted by Charles L. Vickers.

As noted on Mint News Blog, these commemorative issues were authorized by Public Law 113-291, which allows for the minting of  up to 100,000 five-dollar gold coins, 500,000 silver dollars, and 750,000 clad half dollars. For more information of the U.S. Mint’s commemorative coin programs, please visit the Mint’s Web site.