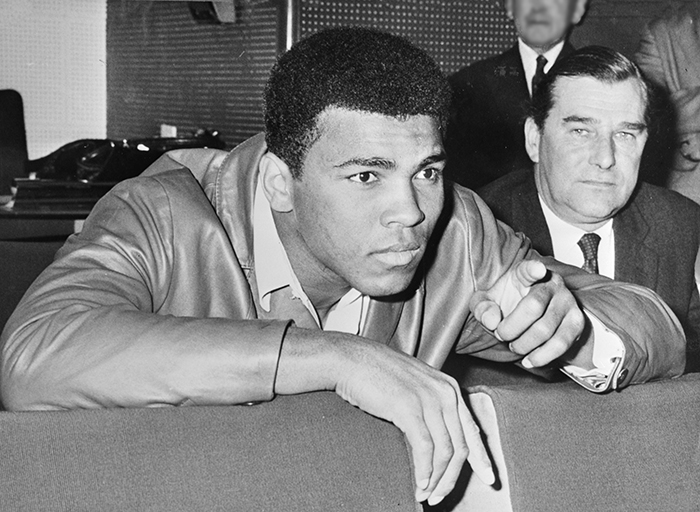 Muhammad Ali at a press conference in the Netherlands in 1966. (Photo courtesy of the Dutch National Archives)

Last month, bills were introduced in both the House and the Senate to have the Treasury produce “coins in commemoration of Muhammad Ali.” Both of the identically worded bills—S. 166 and H.R. 579—are called the “Muhammad Ali Commemorative Coin Act.” One of the two versions must pass both houses of Congress and be signed by the president in order to become law.

Section 2 of each bill cites personal, athletic, and humanitarian qualities that warrant commemoration:

(1) Muhammad Ali was an Olympic gold medalist, 3-time World Heavyweight Champion boxer, and one of the most celebrated and well-known athletes in American history;
(2) Muhammad Ali showed, beyond his impressive fighting prowess in the boxing ring, even greater courage and tenacity as an advocate outside the ring;
(3) Muhammad Ali was a great philanthropist and a strong champion of peace, equality, and freedom;
(4) Muhammad Ali remains an icon of freedom of conscience;
(5) Muhammad Ali was a prominent African American of the Muslim faith, and was, and continues to be, a role model to the citizens of the United States of all races, ethnicities, and religions;
(6) Muhammad Ali used his fame to advocate for humanitarian causes in audiences with world leaders ranging from religious leaders to heads of state; and
(7) Muhammad Ali inspired people around the globe in displaying the same vibrant and larger-than-life character and dedication in spite of his physical ailments.

If passed as written, the act would authorize Proof and Uncirculated $5 gold and $1 silver coins. The design would be “selected by the Secretary [of the Treasury] after consultation with the Muhammad Ali Center … and reviewed by the Citizens Coinage Advisory Committee.” Rather than dictating the aesthetic qualities of the properties (as was the case with the Apollo 11 commemorative coin), the act would simply require that the image “shall be emblematic of the life and legacy of Muhammad Ali.”

The surcharges commonly applied to commemorative coins ($35 per $5 coin, $10 per dollar coin), would be distributed as follows: 80% “to the Muhammad Ali Center in Louisville, Kentucky, to ensure growth and innovation in museum programming to research, promote, and educate on the legacy of Muhammad Ali”; 10% “to the Muhammad Ali Institute for Peace and Justice at the University of Louisville to advance the work, study and practice of peacebuilding, social justice, and violence prevention through the development of innovative educational programs, training, service, and research”; and 10% “to the Muhammad Ali Parkinson Center (MAPC) and Movement Disorder Clinic to continue serving as a resource for Parkinson’s disease patients and their families through the provision of diagnosis, treatments, research, and education.”

(More Mint news after the jump.)

The Mint has announced pricing updates for the following 2017 products:

The 2016 sets are priced at $31.95, $52.95, and $26.95, respectively. Price differences are due to the fact that each Proof Set has three fewer dollar coins each, while the Uncirculated Set has six fewer dollars.

The dates for the releases of the 2017 sets have not yet been announced.

The topics under discussion will be the themes for the 2019 America the Beautiful Quarters Program and for the Office of Strategic Services Congressional Gold Medal.

To learn more about the CCAC, its current members, and the aesthetic elements it looks for in coin and medal designs, see this Mint News Blog post, or go directly to the website of the CCAC (https://www.ccac.gov).   ❑
Share:

My first CCAC Meeting: A spirited discussion and a rare inside glimpse into the design process