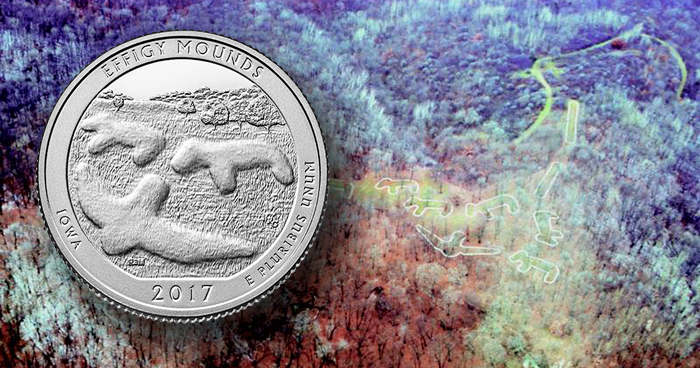 The coin’s reverse depicts an aerial view of mounds in the Marching Bear Group. Inscriptions are EFFIGY MOUNDS, IOWA, 2017, and E PLURIBUS UNUM.

“The Effigy Mounds quarter design embodies the spirit of this sacred landscape,” said Marc Landry, superintendent of the Philadelphia Mint. “This new coin honors a special place where ancient people changed the landscape of their world in the most extraordinary way.”

Launch highlights included a videotaped message from Iowa native Peggy Whitson, astronaut and biochemistry researcher for the National Aeronautics and Space Administration, and special recognition of fourth-generation Iowan Richard Masters, who designed the new quarter. Masters, an artist in the Mint’s Artistic Infusion Program, has designed coins and medals for the U.S. Mint for more than 10 years.

The video below, which was produced by Hamline University’s Center for Global Environmental Education, tells more about the site:

Authorized by Public Law 110-456, the Mint’s America the Beautiful Quarters Program is a 12-year initiative to honor 56 national parks and other national sites. Each year, the public will see five new national sites depicted on the reverses of the ATB quarters, which are issued in the order in which the sites were first established.

Additional information about the America the Beautiful Quarters Program is available on the Mint’s website.

The United States Mint was created by Congress in 1792 and became part of the Department of the Treasury in 1873. It is the nation’s sole manufacturer of legal tender coinage and is responsible for producing circulating coinage for the nation to conduct its trade and commerce. The Mint also produces numismatic products, including Proof, Uncirculated, and commemorative coins; Congressional Gold Medals; and silver and gold bullion coins. Its numismatic programs are self-sustaining and operate at no cost to taxpayers. The Mint is celebrating its 225th anniversary in 2017 (USMint#225).   ❑