On Wednesday, November 9, 2016, representatives from the U.S. Mint and Lions Clubs International will participate in a ceremonial strike of the 2017 Lions Clubs Proof silver dollar, held at the Philadelphia Mint. To commemorate the organization’s centennial in 2017, Congress has directed the Mint to strike and issue up to 400,000 silver dollars.

The organization, which was founded in 1917, seeks to meet the needs of local communities around the world. There are 1.35 million members across 207 countries and geographic areas, making it the world’s largest service-club organization.

The coins will carry required inscriptions of the date (2017), “Liberty,” “In God We Trust,” “United States of America,” and “E Pluribus Unum.” Both Proof and Uncirculated formats will be produced. The coins may only be issued during the calendar year beginning on January 1, 2017.

A surcharge of $10 will be added to the price of each coin. These surcharges will be distributed to the Secretary of the Lions Clubs International Foundation for the purposes of (1) furthering its programs for the blind and visually impaired in the United States and abroad; (2) investing in adaptive technologies for the disabled; and (3) investing in youth and those affected by a major disaster.

The coins will be available to the public in January 2017.

In other news, the Mint announced today that it is lifting the household order limit on the Ronald Reagan Coin and Chronicles Sets. The sets, released late in a year (October 11) that has been filled with tantalizing Mint offerings, performed adequately their first week, selling more than 24,000 units, but tailed off afterward, selling a little over 3,000 units the following week. 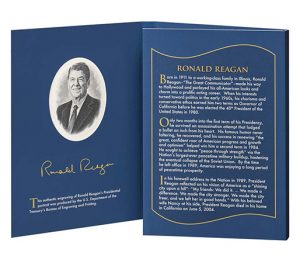