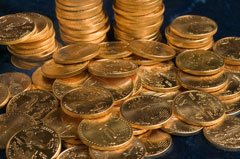 Adrian Douglas, an analyst whose research I have mentioned a few times, published two articles, on August 13 and August 18.  They should be mandatory reading for anyone trying to understand the movement of gold prices over the past decade.  Even more chilling is where it indicates the gold market is going in the near future.

The first article, titled “Gold Market is not ‘Fixed’, it’s Rigged”, carries Douglas’s analysis of the changes in gold prices between the London AM Fixes and PM Fixes and from the London PM Fixes to the following AM fixes.

Over the course of more than the 9-1/2 years in this analysis, the price of gold has risen almost 400%.  Yet, if someone had purchased an ounce of gold at the AM Fix every day and sold it on the same day at the PM Fix, that person would have lost about $500 (ignoring brokerage costs)!

Because this consistent pattern is so unlikely to occur at random, Douglas considers it to be solid evidence of one or more active participants suppressing the price of gold between the London AM (which occurs at 5:30 AM Eastern time and PM (10:00 AM Eastern) Fixes.

In the second essay, titled “The Failure of the Second London Gold Pool,” Douglas shows that the ten instances of greatest gold price decreases from the beginning of 2001 through late 2008 all coincided with the most aggressive declines between the AM and PM Fixes.  This reinforces Douglas’s thesis that the price declines were manipulated and not the result of mere chance.

After laying this groundwork, Douglas then drops his bombshell.  Since the Chinese central bank revealed on April 24, 2009 that it had substantially, and semi-secretly, increased its gold reserves since 2003, major efforts to push down the gold price have failed.  The price suppression efforts have ramped up in the past sixteen months, as demonstrated by even larger takedowns between the AM and PM Fixes, but the overall increase in the price of gold is starting to accelerate.

Douglas is convinced that the gold sold by the International Monetary Fund and the huge gold swaps arranged earlier this year by the Bank for International Settlements were a “last gasp” effort to restrain the price of gold.

His conclusion states, “The result of the 1968 failure of the London Gold Pool to suppress gold was an appreciation of the gold price from $35 to $850 per ounce.  A similar percentage today would carry gold to almost $30,000 per ounce.  This is not a price forecast but an indication that when free market forces have been frustrated by market manipulation for a very long time, the equilibrium price can be many multiples of the suppressed price, and the rise is typically rapid when the suppression is overcome.”

Both articles have already been shared around the world, though not by the mainstream media.  The second article has even been translated into Spanish.