The Treasury of the Isle of Man Government has issued a new coin which marks the 210th anniversary of the year palladium was named by its discoverer William Hyde Wollaston (1766 – 1828).

Metals such as Palladium, platinum, rhodium, ruthenium, iridium and osmium form a group of elements referred to as the platinum group metals. These have similar chemical properties, but palladium has the lowest melting point and is the least dense of them. Ore deposits of palladium and other PGMs (platinum group metals) are rare, and the most extensive deposits have been found in the norite belt covering the Transvaal Basin in South Africa, the Stillwater Complex in Montana, United States, the Thunder Bay District of Ontario, Canada, and the Norilsk Complex in Russia and thus, the metal is found on three continents. Its chemical symbol Pd and atomic number 46, with its numerous applications and limited supply sources of palladium, the metal attracts considerable investment interest.

This rare and lustrous silvery-white metal was discovered in 1803, though Palladium was not actually named until 1804 and it was named for the asteroid Pallas, which was itself named for the Goddess Athena who was known as Pallas Athena. Athena, who was the daughter of Zeus was also the Goddess of war and of many crafts and skills. She was a city Goddess and had temples in many of the leading Greek cities. In art and literature, Athena appears dressed in full armor wearing a large helmet. Athena’s greatest sanctuary was the Parthenon at Athens which she won after competing against Poseidon. 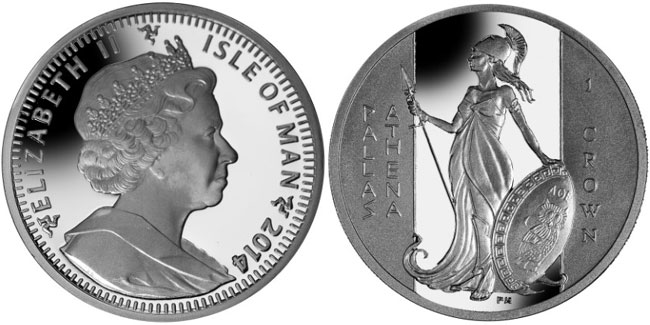 In honor of the history behind the naming of this fascinating metal, the coin, minted by Pobjoy Mint UK, includes a design which includes a graceful image of Athena and shows the Goddess from the side, wearing her helmet and with her shield to her left and spear carried in her right hand. The proof quality finish and with this particular coin’s design sees Athena in the center in frosted relief against a mirror-brilliant background but the two outer segments are totally frosted providing a stunning contract to the central figure. The obverse of the coin features an effigy of Her Majesty Queen Elizabeth II by Ian Rank-Broadley.

Each coin is struck four times to attain the superlative Pobjoy quality proof finish. For more information on this and other coins offered by the Treasury of the Isle of Man Government, please visit the website of the Pobjoy Mint at: http://www.pobjoy.com/ukworld/section.php/968/1

The Pobjoy Mint are anticipating higher than usual demand for this piece and advise inquiring soon to avoid disappointment. Information offered in English, international orders dispatched.