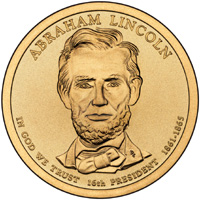 The United States Mint has published the production figures for each of the four 2010 Presidential Dollars. With the latest numbers included, overall production since the start of the series has now reached 2,078,890,000.

Presidential Dollars have been issued from 2007 to present. The series calls for four different designs to be issued each year, honoring the former Presidents in the order served. By law, the Federal Reserve System is required to ensure that each design of the series is made available to financial institutions during an introductory period. This has led to continuing high production levels despite a growing stockpile within Treasury vaults.

The Presidential Dollars have now been produced in greater numbers than any of the other modern dollar coin series. The large sized Eisenhower Dollar, issued from 1971 to 1978 had production for circulation of around 700 million. The small sized dollar featuring Susan B. Anthony had almost 900 million coins produced during the years of issue from 1979 to 1981, and 1999. The original golden dollar series featuring Sacagawea saw circulating coin production of a little under 1.5 billion from 2000 to 2008, although coins were only issued for circulation during the first two years.

In addition to the dollar coin series featuring the former Presidents, the US Mint also currently issues the Native American Dollar. In 2009 and 2010, about 150 million have been produced.

This year’s releases for the Presidential Dollar Program featured the former Presidents Millard Fillmore, Franklin Pierce, James Buchanan, and Abraham Lincoln. The individual production figures by mint facility and design are included below.