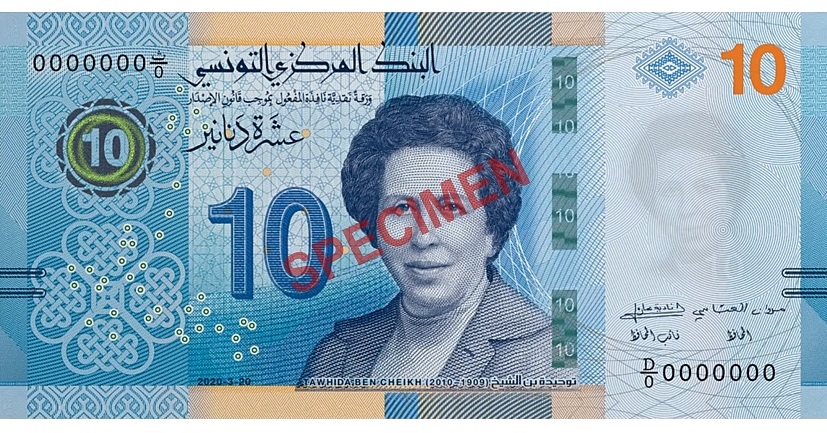 The Banque Centrale de Tunisie has released (27th March) new banknotes, which, for the first time in the modern history of the Arab world, an Arab nation has issued a banknote featuring a woman. The new 10-dinar banknote (U.S. $3.49) features a portrait of Dr. Tawhida ben Cheikh (1909–2010), who became the country’s first accredited female physician in Tunisia, as well as the first-ever female physician in North Africa.

Born in Tunis, Tunisia, at the time when Tunisia was a French colony, ben Cheikh came from an elite Tunisian family that was socially conservative. Her early education began at Tunisia’s first public school for Muslim girls, which was established by Tunisian nationalists and liberal French protectorate authorities. While attending this school, ben Cheikh was taught Arabic, French, the study of the Quran, as well as a western-style curriculum. Ben Cheikh’s secondary school instructors and a physician from the Louis Pasteur Institute of Tunis by the name of Dr. Etienne Burnet persuaded her mother that she showed significant promise in furthering her education, but her widowed mother was reluctant to allow her to go to France after secondary school. Ben Cheikh enrolled in the School of Medicine in Paris to pursue her education and earned a degree in medicine in 1936, thus, becoming her country’s first accredited female physician. Upon her return to Tunisia, Dr. ben Cheikh decided to specialise in gynaecology and became the director of a women’s clinic in Tunisia. Knowing full well the obstructions in many Arab-majority countries for women to receive information on family planning, ben Cheikh was an active supporter of responsible contraception during the 1960s and 1970s. Dr. ben Cheikh initiated an awareness campaign for family planning in Tunisia, concentrating on the most impoverished communities in the country where large families often meant deprivation and limited opportunities for education. Ben Cheikh was also associated with a number of non-profit organisations working to provide healthcare for those who could not afford medical treatment. For her efforts with the less-privileged, she was known as “the doctor of the poor” by her countrymen. She spent her days tending to young and old Tunisians in many deprived communities in and around the country’s capital of Tunis.

The banknote is printed on a cotton-based paper and is predominantly blue in colour, measuring 148 by 73 millimetres. The face side of the note is dated as 2020 – 3 – 20 and includes a portrait of Dr. Tawhida ben Cheikh, which is based on an actual contemporary photograph.

The back side includes a collection of pottery of Berber origin and an ornate bracelet. A background of stylised floral motifs and arabesque elements are also featured in the background.

Watermark: The image of ben Cheikh and the number 10 is positioned to the right of her primary portrait and can be seen when the note is held up to a light source or through light.

Windowed security thread: This thread appears continuous when held up to a light source, but appears as segmented or discontinuous otherwise.

Colour-shifting print: A circle on the upper-left corner on the face side containing the number 10 changes colour when the note is tilted and held under a light source.

Micro-text printing: The application of micro-text of the words DIX DINARS can be seen below the portrait of Dr. ben Cheikh and in other locations on both the face and back sides.

Iridescent printing: Shown on the back side, a vertical strip containing repeated numerals of 10 can be seen when the note is tilted under a source of light.

The Central Bank has announced the previous and new series 10-dinar banknotes should circulate alongside each other until further notice. For additional information about the coins and banknotes issued by the Banque Centrale de Tunisie, please click here.