The Government & Treasury of Niue Island have issued a new collector’s coin which marks a milestone in European Radio communications and entertainment with the 50th anniversary of Troika Radio broadcasting from Warsaw, Poland.

During the Communist era, there were no privately owned or operated radio stations broadcasting within Poland. The availability or selection of entertainment was limited to just two other radio stations during this period. It was radio 3 or “Trojka Radio” as it was more commonly known which emerged as one of the more progressive stations and included a musical line-up from contemporary & rock music to American Country and classical opera. The eclectic range of tastes of music originating not only from Poland but from other countries made Trojka Radio a firm favorite with the younger or student generation of Poles. Launched on the 1st April 1962 from their studios in Warsaw, Trojka Radio was eventually able to adapt to the new democratic changes within the country in the late 1980’s and make the transition from state-owned monopoly to a commercially viable and successful public limited broadcasting company in 1993. 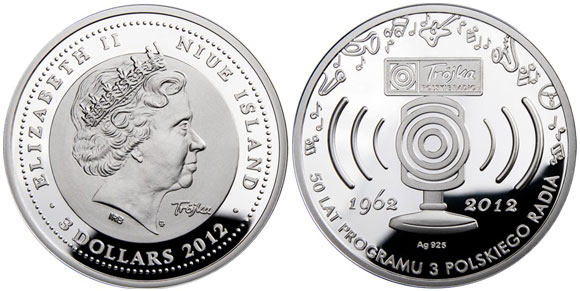 The coin specifically focuses on the number “3” as the denomination of this crowned sized coin carries a face value of Three Dollars. Struck by the Mint of Poland, the obverse side includes a portrait of HM Queen Elizabeth II and the text “ELIZABETH II NIUE ISLAND” above the primary portrait and “3 DOLLARS 2012” positioned below. The insignia of Trojaka Radio can be seen just to the lower right portion of the Queen’s portrait with the Mint of Poland’s mintmark just below the insignia.

The reverse design includes a rendition of a period-era loudspeaker along with the logo of Trojka Radio above. Towards the upper rim, a row of stylized insignias representing musical notes and instruments is positioned. The commemorative years of “1962 2012” can be seen on either side of the base of the loudspeaker. Text in Polish reads “50 LAT PROGRAMU 3 POLSKIEGO RADIA” (50 years of the Radio 3 program).

The coin is struck to proof quality in sterling silver with a weight of 33 grams and a diameter of 38.6 mm. A total mintage of 3,333 pieces has been authorized. For more information on this and other coins offered by the Mint of Poland on behalf of Niue Island and other issues, please visit their customer shop at: http://www.skarbiecmennicy.pl/50-lat-programu-3-polskiego-radia-3-dolary.html The website is currently only available in Polish but can be translated on-line.