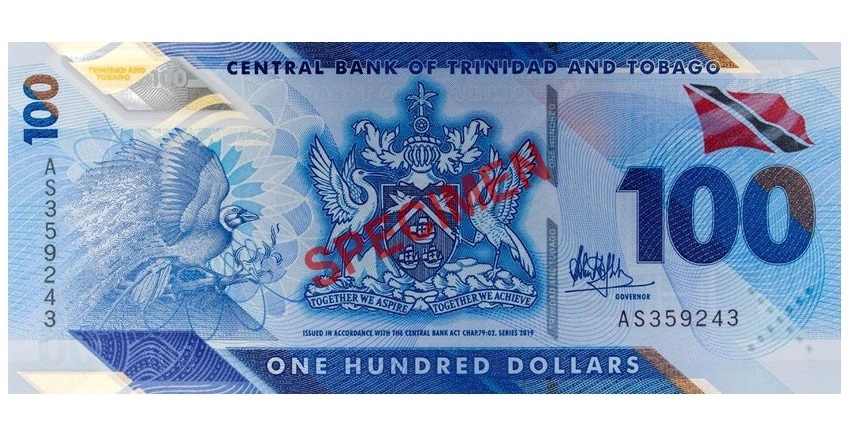 The Central Bank of Trinidad and Tobago has announced (5th December) the introduction of a new $100 banknote (U.S. $14.80) which becomes legal tender from the 9th December 2019. The new banknotes are printed using a polymer substrate that has significantly enhanced the security features of these new generation banknotes. The introduction is part of the objectives laid out in the Central Bank’s strategic plan of 2020-2021, which seeks to improve the durability of the banknotes used in Trinidad and Tobago. The upgrade is also in the capacity of protecting against forgery, as well as allowing for easier tactile recognition by those who are visually impaired. The Central Bank intends to expand the range of polymer notes to the other denominations of five, 10, and 20 dollars in 2020. The $50 value transitioned to polymer in 2014.

The latest 2019-dated banknotes retain the colour identity of the previous issue, which also includes the designs and motifs of images and illustrations. The note is predominantly blue and measures 156 by 66 millimetres. 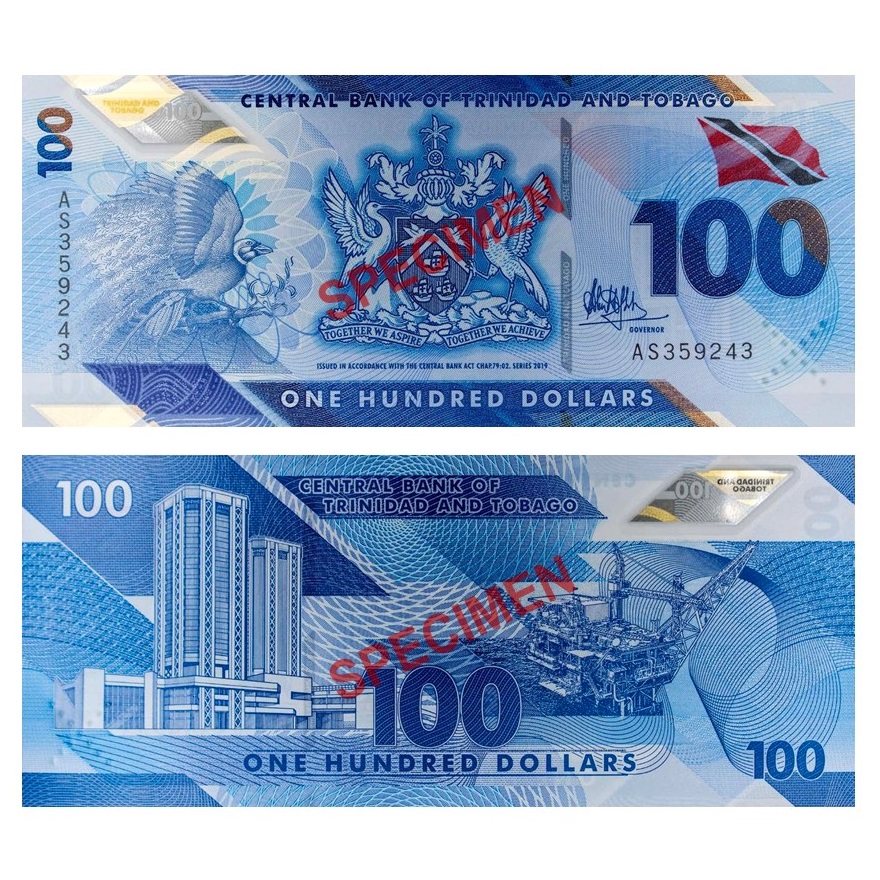 Face: Depicted is the bird of paradise. A native to the isle of New Guinea, this exotic avian continues to grace the $100 banknote. These birds came to Trinidadian shores through and English coca estate owner who attempted to breed them in Little Tobago in the early 20th century. In the centre of the note is the crest of Trinidad and Tobago, the denomination of 100 is placed to the right of the crest in bold, large numerals. The Trinidadian flag is seen just above the note’s denomination.

Back: Shown on the back is an updated image of the Central Bank of Trinidad and Tobago’s bank headquarters. Located at Independence Square in the capital city Port of Spain, the two massive towers dominate the skyline since their completion in 1986. Also depicted is a representative illustration of one of the country’s most lucrative industries, oil refining and off-shore oil exploration, with the image of an off-shore oil rig. Placed between the two images is the large numeral 100 and the text ONE HUNDRED DOLLARS.

Tactile imprint application: As viewed from the face, a tactile imprint is located toward the lower-right corner. A series of dots forming the shape of a large “X” can be felt. This feature is added to aid the identification of the new note for visually impaired persons.

Micro-perforations: When the note is held against a light source, the numeral 100 can be seen towards the lower-left half and within the dark blue printed field.

Micro-lettering field: Located on the face, the words ONE HUNDRED can be seen with a magnifier. This field is integrated within the lower banner containing the text ONE HUNDRED DOLLARS placed below the note’s crest.

Shimmering metal application: Located on the face and to the upper-left corner, the appearance of gold can be seen when the note is tilted under a light source.

Security thread appearance: The appearance of a segmented security thread containing see-thru micro-lettering is located just to the right of the centred crest shown on the face side.

The Central Bank has also announced the new polymer $100 note will co-circulate with the existing paper-based $100 banknote, which remains as legal tender until further notice. For additional information about this new banknote and currently circulating banknotes and coins in Trinidad and Tobago, please visit their website.