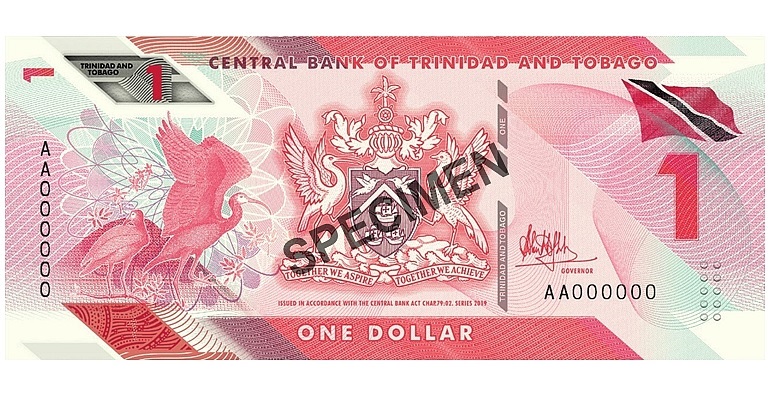 The Central Bank of Trinidad and Tobago has unveiled (21st February) concept designs of their new series of updated banknotes which are to be produced in polymer. In line with the $100 denomination banknotes (USD $14.75) that were introduced into circulation in December 2019, the new designs will feature on the face side, bold, bright numerals representing the note’s value and a variety native birds found on the islands, with the country’s crest depicted in the centre.

The scarlet ibis is the national bird of Trinidad. Brilliant scarlet in colour, these birds are, at times, mistaken for flamingos.

The blue-crowned motmot is native to Trinidad and Tobago and the wider Central and South American region.

The cocrico is the national bird of Tobago. Known locally as “chachalaca,” the cocorico resides in the hill-forest areas of the island.

Trinidad and Tobago is known as “The Land of the Hummingbird,” as more than 16 species of this bird have been found here.

The red-capped cardinal, a genus of red-headed cardinal tanagers, is a rare, beautiful bird which sports the national colours of Trinidad and Tobago: Red, white, and black.

$100: Issued in December 2019, these notes feature an image of the bird of paradise — Paradisaea apodo.

The bird of paradise is one of the most beautiful wild birds in existence. A native to the isle of New Guinea, these exotic birds came to Trinidad and Tobago through an English coca estate owner who attempted breeding them in Little Tobago in the early 20th century.

The back of all denominations includes an image of the building of the Central Bank of Trinidad and Tobago. Additional references and subjects concerning reverse designs will be confirmed in due course, as the notes are scheduled for their issuance.

As part of the unveiling, the Central Bank announced that some denominations would be available to the public from September 2020, though no actual schedule or which denomination which would next be released was included in the announcement. Featured in the announcement were all six currently circulating dollar denominations from $1 to $100, which also show the present colours assigned to each value are to be retained as well as their current dimensions. As with the newly introduced $100 polymer banknotes, the Central Bank intends for the new polymer notes to co-circulate with the existing paper-based notes as legal tender at least until the end of 2021. The current series of banknotes were issued in 2002 ($1 and $20 denominations) and in 2003 ($5, $10, and $100). In 2012, $50 banknotes were reintroduced into circulation on the occasion of the 50th anniversary of Trinidad and Tobago’s independence and were the country’s first notes produced on polymer.

As with a new, fresh look in terms of design, the notes will also incorporate upgraded security features such as tactile imprint, micro-perforations, micro-lettering, shimmering metal print, and updated security thread applications. For additional information about the coins and banknotes issued by the Central Bank of Trinidad and Tobago, please visit their website.