The Transnistrian Republican Bank have announced that they will issue new currency units that will be made of composite materials. The currency items are primarily being issued to commemorate the twentieth anniversary of the national currency. The composite material or Plastic coins will have a different geometric shape and color depending on denomination.

The four coins, from one ruble to ten rubles are to replace the banknotes of the same denomination. The Press office of the Bank have indicated that the new money will combine the best qualities of both coins and banknotes with high wear resistance and a wide range of security features. The Press office have also indicated that the coins for use in Transnistria were developed in Russia. 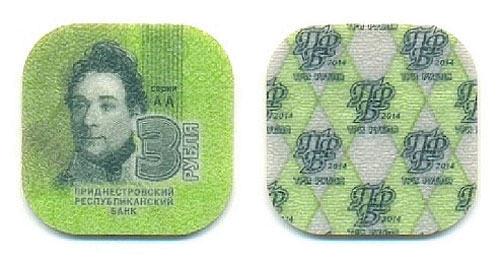 The information distributed to various news media agencies mentions that this type of composite material money is not produced anywhere else in the world. First Deputy chairwoman Olga Radulova indicated and confirmed that the innovative currency units were designed by colleagues from the Russian Federation and that Transdinistria are the first to use them. The move is seen as an alternative to producing expensive metal coins as well as to meet public demand for small value denominations. The new coins take their cue from plastic banknotes which are in use in many countries of the world but the coins made ​​of composite materials will appear for the first time in Transnistria as a test market. 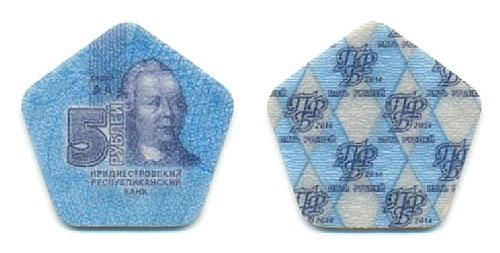 For protection against counterfeiting, the technology of their production involves the use of a special texture, contour elements, micro texts and specific reflection of light when exposed to ultraviolet and infrared light. The plastic coins will be introduced into circulation from the 22nd August 2014 and will have a parallel circulation with paper money of the same denomination.

The reverse of each denomination includes a diamond-shaped design which includes the initials of the National bank & denomination in print and the year “2014” The coins and banknotes of the same denomination are expected to circulate alongside until the notes are gradually replaced by the coins.

The Republic of Transdnistria, a break-away Russian enclave territory declared their independence from the Republic of Moldova in 1992, only Russia recognizes their legitimacy. The Transdnistrian ruble, at a par with the Russian ruble – are issued through the authority of the Transnistrian Republican Bank since 1994. The Bank regularly issue collector coins produced in precious and base metals, the coins are produced by the Moscow and St. Petersburg mints.