The Monnaie de Paris have launched a new set of coins to mark one of the world’s most prestigious cycle races – that of the Tour de France. Originally begun in 1903 to increase paper sales for the magazine L’Auto, the race has been held annually since its first edition except for when it was pre-empted during the two World Wars. The Tour de France has since evolved into one of the world’s most followed races competing for the coveted yellow jersey for cyclers.

The current structure of the Tour de France consists of 21 day-long segments or stages over a 23-day period and covering around 3,200 kilometers or 2,000 miles in total. The race alternates between clockwise and anti-clockwise circuits of France. The number of teams usually varies between 20 and 22, with nine riders in each. Today, it is estimated that more than 191 countries broadcast the race in either its entirety or in part, reaching hundreds of millions of viewers worldwide. Although the race has undergone much controversy over the last decade, the popularity of both the race itself and the sport has never diminished. 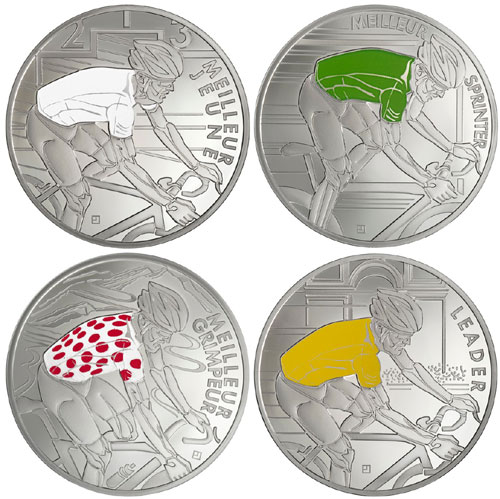 Since the traditional colored jerseys symbolize position and accomplishment during the race – the Monnaie de Paris has added color to the jerseys of the riders depicted on the silver coins – they are as follows:

The coins, three gold and four silver examples, include various depictions of cyclers and specific elements which are synonymous with the race itself. The gold examples all have a single obverse design – illustrating a pair of cyclists – one from the original tour a century ago, and one contemporary cyclist complete with helmet and state-of-the-art bicycle – both their cycles however, share one wheel symbolizing their connection to the tour over the 100 tournaments. The reverse, common to all of the coins in the set includes the logo of the Tour de France, along with the 100th anniversary addition just below. The Arc de Triomphe and stylized outline of the island of Corsica symbolizes the arrival and departure of the 100th tour for 2013.

The Tour de France this year was held from the 29th June to the 21st July. The silver €10 coins are offered as single purchases or a set of four and the gold coins are offered as single items. For more information about these and other coins offered by the Monnaie de Paris, please visit their website at: http://www.monnaiedeparis.fr/Sport/Tour-de-France-100-me-dition-pcw_NdvKztz5MAAAEuac8BfOwnntGsE6zmD3EAAAE9pA4SLNV4.html?JumpTo=OfferList&JumpFrom=SearchResult&PageableID=OHysE6zmiPoAAAE_43kI_J7u&PageNumber= Information offered in both English and French, international orders fulfilled.