It’s been an eventful year at the U.S. Mint. American Eagle Silver bullion coins have broken a sales record for the third year in a row, and the Proof ASE’s are running neck and neck with the 2015 U.S. Mint Proof Set for the distinction of being the biggest selling numismatic item of the year. These reliable and popular issues may be the bread-and-butter of the Mint’s offerings, but a big, exciting release is always guaranteed to get a collector’s heart-rate going. We’ve had more than our share of those this year, so for fun I thought I’d offer my picks for the top 5 launches of 2015. 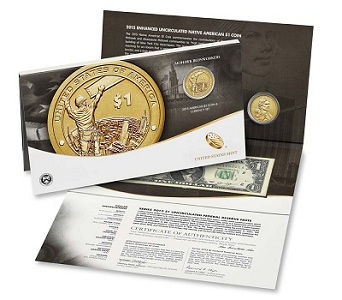 The 2015 Coin & Currency Set was expected to have a big opening after last years’ set saw high demand when it was revealed that the included Native American dollar would have an Enhanced Uncirculated finish. This year’s set would also have the exclusive dollar, and the Mint attempted to prepare for demand by bumping the mintage limit for this year’s set to 90,000 units. The set had a big first day, selling over 44,000 sets, despite crashes and lags on the Mint’s Web site. It sold slowly but steadily for months afterward, and only went into Unavailable status less than two weeks ago, after its order limit of five per household was lifted. You could argue that the high mintage limit let some air out of the balloon for this offering, but this was an accessibly-priced item ($14.95) with wide appeal that made a big splash upon its release. 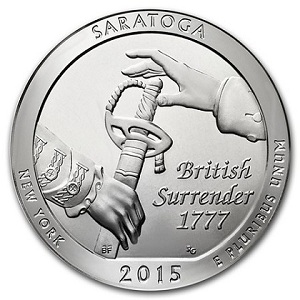 The Saratoga 5 oz. Uncirculated Coin gets a mention because its popularity had a Little Engine That Could quality that surprised many collectors. I don’t think I’ve heard anyone call Saratoga their favorite America the Beautiful design of 2015, but it debuted strong nonetheless, selling 15,904 pieces its first day and heading into Unavailable status in less than a week. It certainly benefited from the interest shown the 2015 American Eagle Platinum Proof Coin, which was released the same day, but that doesn’t take away from the surprise felt by many when we learned that Saratoga’s inventory was scooped up by collectors faster than any other 5 oz. ATB release this year. 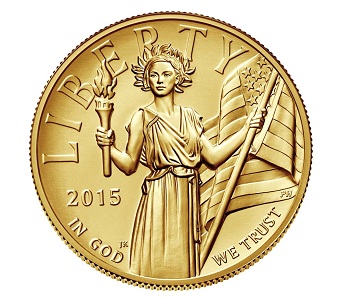 The Liberty HR was a big-deal coin that sold 36,686 pieces on its first day of availability–a fairly astounding number considering it was priced at $1,490 when it launched. It remains the only U.S. gold coin ever to have a $100 face value and, as a one-off release, it retains the singularity of a non-serial issue that won’t be available year-in and year-out. Sure, it’s yet to exhaust its 50,000-piece mintage, but that will happen any day now, and whether or not you love the design you have to admit that product releases don’t come much bigger than this. 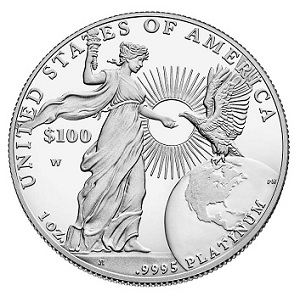 The story of the 2015 Platinum Eagle has been anything but boring. For most of the year it wasn’t given a release date as the Mint struggled to come up with enough platinum planchets to move forward with the issue. Then, just before the Thanksgiving weekend, the Mint shared a surprise announcement saying the coin would be released less than a week later and the issue would be awarded the low, low mintage limit of 4,000 pieces. This meant that even those who may have been on the fence about the coin were enticed by its built-in scarcity, and the issue had all of its available inventory claimed less than ten minutes after its release. 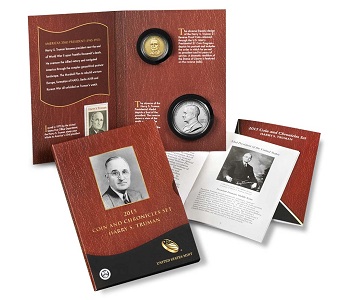 I realize that putting the Truman Coin & Chronicles Set at #1 is going to annoy some people. But remember, I’m not saying this is the greatest, most consequential numismatic product struck by the Mint in 2015. I’m saying its launch was a big story, the repercussions of which were felt by interested collectors for months afterwards.

Before the set was released, there was some sense that it would be a high-demand item. The introduction of unique Reverse-Proof Presidential dollars to the 2015 sets added an exclusivity to the eminently collectible silver medals available in earlier sets. The design for both the coin and medal were solid, and the $57.95 price tag wasn’t steep enough to exclude anyone who was dying to have it. The 17,000-unit mintage limit looked like it might be a little low.

You may remember what happened. Sales commenced at noon on June 30, the Mint’s Web site was beset by lags and crashes, and the set went to Unavailable status in 15 minutes. Many who did not get to place their orders were upset. Those who got through were excited. The experience has impacted the market for Coin & Chronicles releases ever since.

By the time the Eisenhower set was released, people knew what to expect, and things unfolded as anticipated. The Mint’s Web site struggled and Eisenhower was gone in under 15. The Mint reacted by bumping the mintages on the subsequent Kennedy and Johnson sets; Kennedy got a whopping 50,000 set mintage, and though it sold 40,000 units in its first hour of availability (the Mint seemed to fix many of those Web glitches), it would not sell out for weeks. Next, the Lyndon Johnson set was given a 25,000-unit limit. By now everyone knew the Coin & Chronicles Sets were a hot item. The Johnson set was Unavailable four hours after its release.

Each of the 2015 Coin & Chronicles launches had the feeling of an event, thanks largely to the excitement that first surrounded the release of the Truman set. The Truman issue remains the most in demand of these sets, its value having tripled or more, according to eBay sales. So, because this release affected the way so many people viewed all four 2015 Coin & Chronicles releases, I’d argue that its relevance exceeded even its importance as a collector item. As an added bonus, its seems the Mint has listened to complaints about their Web site during periods of high traffic, and the site now processes orders much more smoothly during those crucial minutes following a big release. It all seemed to start with Truman.

So what 2015 release stands out in your mind, and why?